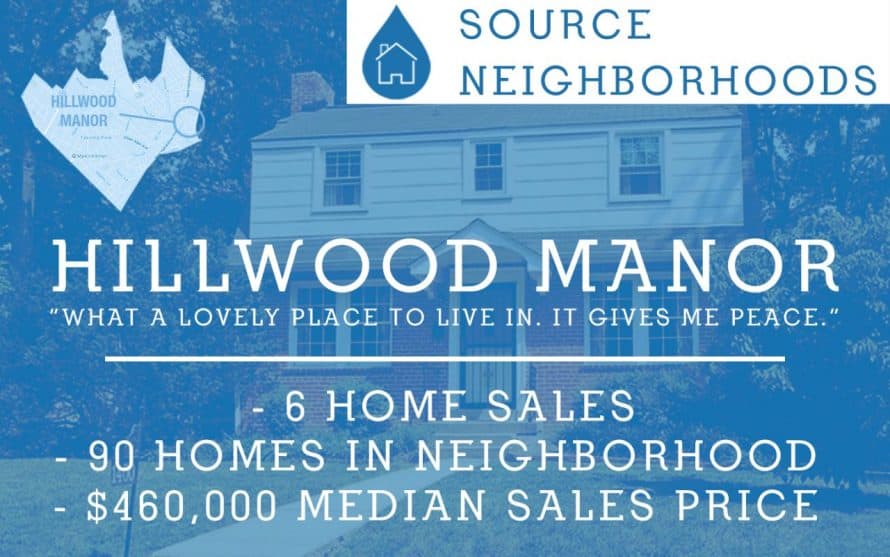 Over the next several months, we’ll be rolling out a new feature, Source Neighborhoods, which will look at the communities in which we live, outlining their boundaries, community resources, and the local real estate market.

Ready access to the Sligo Creek hiker-biker trail and Montgomery County’s Hillwood Manor Park in the 1300 block of Elson Street encourage outdoor fun. And for those with an international palate, the Caribbean Market is just up the road, as well as Tiffin/Udupi Palace, (Indian and Indian-vegetarian,) La Chiquita (Salvadoran) and Pho 301 (Vietnamese) all within a mile.

Over the past six months, there have been a half dozen public-record sales in this neighborhood of roughly 90 homes. The median sales price over the same period was $460,000, representing a slightly more affordable option in line with Montgomery County’s median sales price than in the rest of Takoma Park, where the median is around $500,000.)

Of the homes that sold, only two failed to sell at their initial asking price. One of these came very close after a bidding war ensued after 110 days on market and successive price reductions finally engendered a response from the market.

Relative affordability has meant an abundance of people working in creative pursuits. With a mix of both longer-term and newer residents, all in a lush setting, resident Karina Lyubarskaya sums it up: “What a lovely place to live in. It gives me peace.”

Look forward to more Source Neighborhoods updates in the weeks to come.