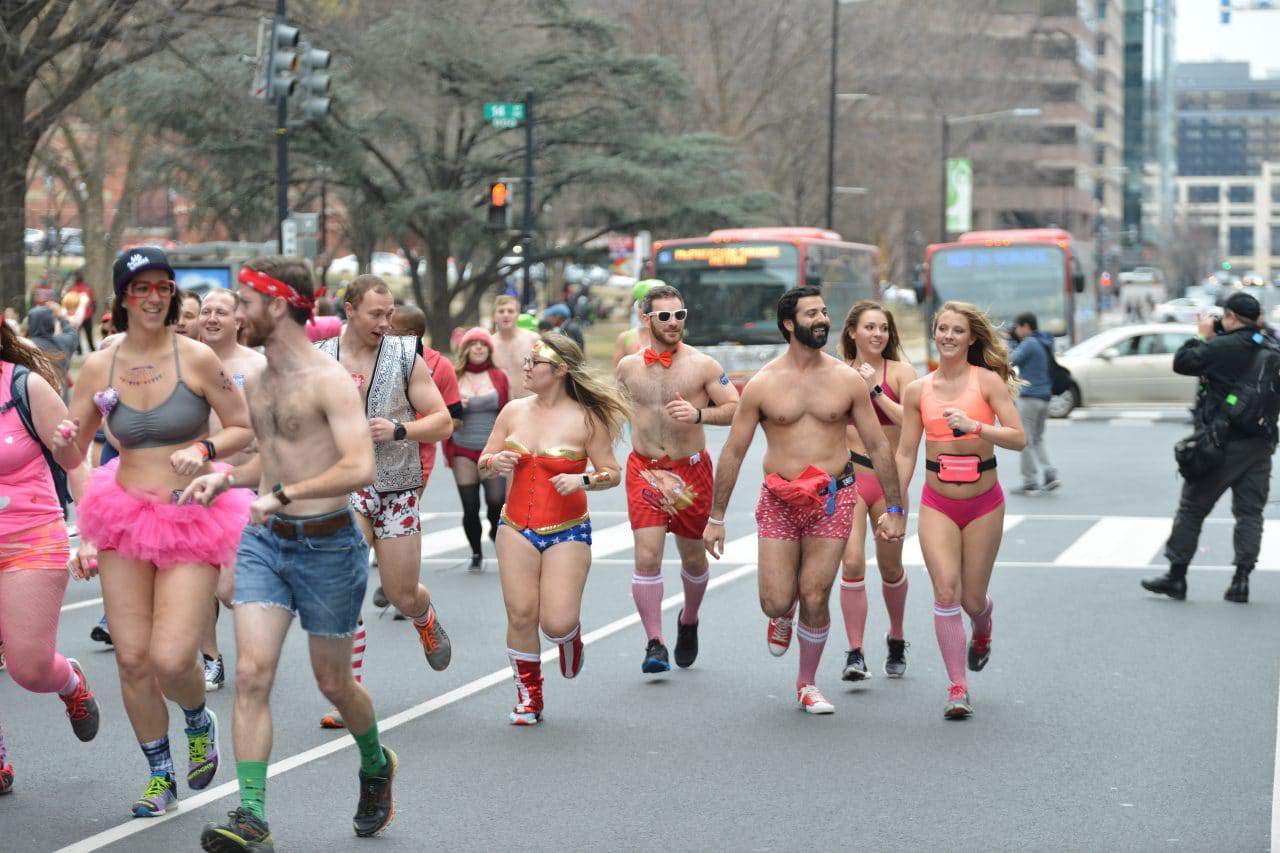 Photo from the 2017 run from Wikimedia Commons

Snowmageddon 2010 was a proverbial blessing in disguise for the founders of Cupid’s Undie Run.

Silver Spring resident Brendan Hanrahan and some friends scheduled their initial charity event for what turned out to be the weekend after the storm dropped nearly 30 inches of snow on the area.

“Everybody was so pent up that they were Googling ‘What can I do this weekend? Please get me out of the house,’” he recalled. “All they found was us, because we were the only ones stupid enough that [we] didn’t cancel our event.”

Cupid’s Undie Run was started to raise money for research into neurofibromatosis, a rare genetic disorder that causes tumors to grow on the nervous system. It affects one in every 3000 people and there is no cure.

A childhood friend of Hanrahan’s in his hometown of Lilburn, Georgia, had the condition, and started developing tumors when he was in high school.

Hanrahan later came to this area to attend graduate school at the University of Maryland. As his friend’s condition worsened, and remembering how the local community had helped the family, he decided he needed to do something to assist. The Undie Run was born.

That first run, based out of a bar in the Capitol Hill area, was more successful than anyone anticipated.

The event got the attention of the Weather Channel, where a story attracted others to the cause, and so the group incorporated as Cupid’s Charity in 2011.

“It was like, ‘Oh, this actually worked? I guess we need to think about legitimizing this,’” Hanrahan said. The charity also teamed up with the Children’s Tumor Foundation (which is celebrating its 40th anniversary this year) to support that organization’s efforts.

The organization is now based in Denver at least partly because, Hanrahan said, when they got to the point where they needed to hire staff, the first person hired lived in Denver (the group also has a partner organization in Australia raising funds for NF research).

While this growth was occurring, Hanrahan moved to 1200 East-West Highway in 2011 and earned his doctoral degree in materials science and engineering from the University of Maryland in 2013.

He works as a materials engineer at the U.S. Army Research Lab in Adelphi, working on new materials to replace batteries and make new power sources for soldiers.

He and his wife, Tamara Forys, bought a home in the Forest Glen area about three years ago and both remain active on the Cupid’s Charity board, which Hanrahan continues to chair. The group has raised about 14.5 million since 2010 via runs and other fundraising events.

“There are a lot of fun run things that may have a charity partner,” Hanrahan said, “but we are a charity first and foremost, and our partnership with the Children’s Tumor Foundation—we’re basically hand-in-hand on this, and they are really leading on the scientific side.”