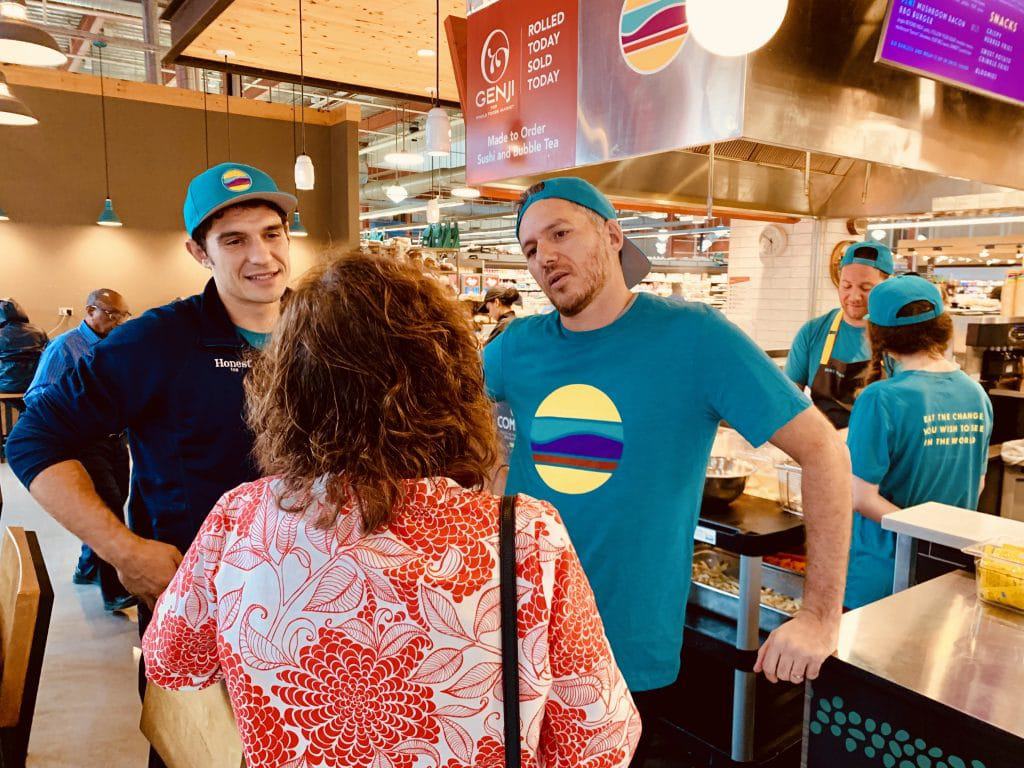 The outlet is inside the Whole Foods at 833 Wayne Ave. in downtown Silver Spring.

The restaurant features Beyond Burgers, a product of Beyond Meat that is a plant-based burger made without GMOs, soy, or gluten.

Mendelsohn, a former Top Chef contestant who’s known for his burgers at Good Stuff Eatery and operates several other area restaurants, was introduced to the product by another local entrepreneur, Seth Goldman.

Goldman is the co-founder & TeaEO Emeritus of Honest Tea and is the executive chair of Beyond Meat.

“Spike and I were at a conference, at least two years ago, and I brought him some Beyond Burgers and stuck them under his chair,” Goldman said. “He tried them and he loved them.”

“He slipped a little cooler under my chair at the panel and he said ‘Take these home, grill them up and let me know what you think,’” said Mendelsohn (who married a vegan, as it happened).

“I realized there was going to be a conflict of interest if I became involved,” Goldman said, since he’s an employee of the Coca-Cola Co. (which bought Honest Tea) as well as working with Beyond Meat.

“The idea was 100 percent plant based, but we really didn’t want to preach that we’re vegan or vegetarian,” Mendelsohn said. “We want people to know us as PLNT Burger and deliciousness.”

The limited menu, which is certified kosher (the only kosher restaurant in downtown Silver Spring, Jonah said), includes burgers, a vegan cheeseburger and a version topped with mushroom “bacon.” The burgers are served on a potato flour bun or can be wrapped in Swiss chard.

Other items include fries, sweet potato fries, chopped salad and a “Bloomie,” which is like a smaller Outback Bloomin’ Onion, Mendelsohn said.

The outlet also serves Honest Tea and lemonade, as well as “Flo-Zone” soft serve options made with oat milk.

The Whole Foods location is a start that came about via Goldman’s relationship with the company through Honest Tea and Beyond Meat. Mendelsohn expects that one day they will branch out to other locations, including stand-alone restaurants.

“PLNT” can be read as “plant,” “plenty” or “planet,” he pointed out, noting the positive effects of plant-based food options on the environment.

“Take the idea of plant product out and just enjoy the burger, enjoy the fries, [and] be like this always existed, like we never went to animals for burgers and just decided to eat plant all along,” Mendelsohn said. “That’s what we’re trying to accomplish.”