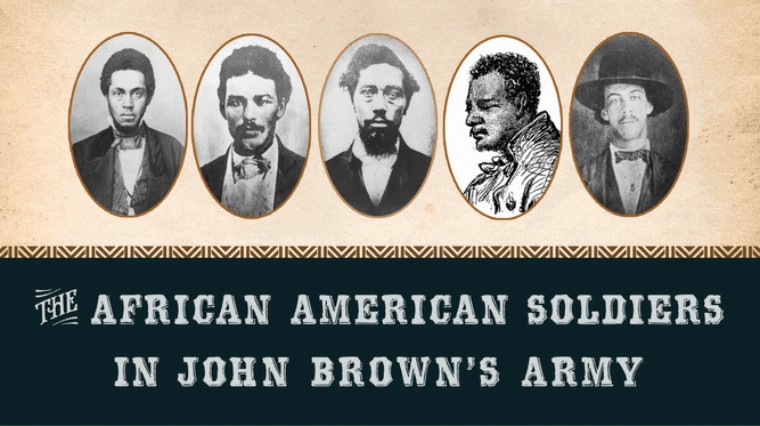 A Woodside Forest resident has told a little-known story of five African-American men who fought alongside John Brown in the raid on Harpers Ferry.

Meyer, a reporter and editor for The Washington Post for 34 years, originally got interested in the story when he covered a Veterans Day event that included the dedication of memorial plaque to Anderson at National Harmony Memorial Park near FedEx Field (where about 39,000 remains were relocated from its original location near the current Rhode Island Metro station).

“One of his descendants had been active over a period of years trying to bring attention to him,” Meyer said. The event also was attended by reenactors of the 54th Massachusetts unit of the U.S. Colored Troops (featured in the movie “Glory”).

“It made a big impression on me,” he said.

After leaving the Post in a buyout in 2004, he did a longer piece about Anderson in the Post’s Sunday magazine called “Sole Survivor.” (The other four were either killed in the raid or were caught, convicted and hanged for their actions.)

Originally born free in Chester County in Pennsylvania, Anderson fled to Canada after the passage of the Fugitive Slave Act of 1850. He followed the Shadd family, a group of African-Americans he knew who had left the United States for the same reason. He eventually worked for Mary Ann Shadd Cary in Chatham, Ontario.

Cary, an anti-slavery activist and suffragist, published an abolitionist newspaper, The Provincial Freeman (making her the first black female publisher and editor in North America). Anderson worked as a sales agent, then as a printer and contributed stories to the paper. He also wrote the only insider account of the raid.

Cary went Howard University after the Civil War to study law; Anderson followed her to Washington. Meyer, looking for more information about the relationship between the two, found some of Cary’s papers at Howard in the course of his research on Anderson. Those included two letters John Anthony Copeland sent to his family shortly before he was hanged for his role in the Brown raid that Cary had reprinted in Provincial Freeman.

“They were just very affecting,” Meyer said. “They were actually heartbreaking letters. So I had an epiphany—I thought well, there’s a story here, but it has to be about all five [men].”

One of the people he consulted during his research for the Anderson article was a prominent Brown historian, Stephen B. Oates. He asked Oates why so little had been written about these men who generally were relegated to a footnote if mentioned at all by historians.

“He said, ‘Well, two things. One, so little is known about him,’ and the other answer was racism, plain and simple,” Meyer said. “So I took those as challenges.”

Other projects took precedence for a few years, but Meyer came back to the book idea. He engaged an agent, signed a contract for the book in 2016 and it was published in June.

“It’s not just about what happened in this fateful time and place, October 1859 in Harpers Ferry,” Meyer said. “It was really about the world into which these men were born and raised. It’s about their families, their lives. . .the aftermath and their legacies down through the generations right up to today.”

Meyer also talked about the difference between the activities marking the 100th anniversary of the raid in 1959. He said he looked at 150 photos of that day from the Park Service, and not one person of color was to be seen in any of them.

“My five guys weren’t even on the radar screen,” he said. “They weren’t part of it at all.”

“The Park Service made a great effort to be inclusive, both of the history and also they reached out to descendants of all sides and they were able to contact many descendants of these African-American raiders,” Meyer said.

The Park Service shared the list of descendants (Shields Green had none that anyone has been able to identify) with Meyer, so he was able to talk to a number of them.

Four of the five men were of mixed race, and Meyer learned that the parents of Ashton Robinson III, one of Newby’s descendants, went to Dunbar High School in Washington. They later moved north and due to their light skin, passed as whites.

“Ashton grew up in tony Weston, Connecticut thinking he was white,” Meyer said. “It wasn’t until he was in his mid-40 that he found out he was African-American.”

His family had lied to Robinson all that time.

Eventually, he told Meyer during a visit where Robinson lives with his wife in a small town in Utah, an aunt told him the truth.

“As he was telling me this, he starts to sob for a few minutes, and it really hit home for me the emotional toll, not just of his parents lying to him, but the whole original sin of slavery and the efforts of these five men to purge America of that sin and how the legacy lives on,” Meyer said.

“We continue to deal with this today and we continue to be divided, polarized by issues of race and color, and until we deal with it, own our history in all its messy complexity, we shall never overcome [it],” he added. “To me, that’s the lesson of these five men. As I say in my talks, they died to make us free, but the struggle continues.”

“Five for Freedom” is available in hardcover and for Kindle from Amazon and in Apple’s iBooks store. Meyer will discuss the book at 6:30 p.m. Sept. 6 at Busboys and Poets, 14th and V streets.