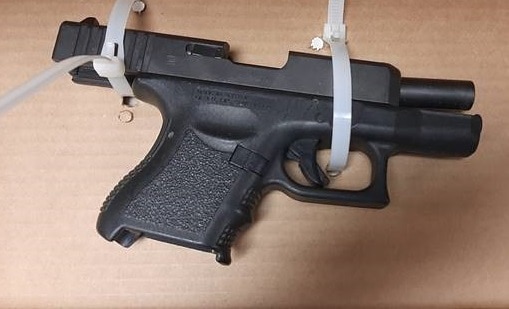 Officers from the Montgomery County Police Department’s 3rd District have arrested and charged Mario J Rios, age 21, of Schrider Street in Silver Spring, with criminal offenses including possession of a handgun, possession of a handgun by a prohibited person due to prior criminal convictions, and second-degree assault for assaulting a 3rd District officer, according to an MCPD press release:

On November 1 at approximately 11:10 pm, the Emergency Communications Center (911 Center) received a call from a witness who had just observed a hit-and-run collision.  The witness stated that a Dodge Caravan had just struck a parked vehicle on Silver Spring Avenue, drove off, and parked approximately two blocks away in an apartment parking lot located at 8115 Schrider Street.  The witness then observed the driver exit the vehicle and walk away.

The two responding officers located the striking vehicle, a Dodge van, in the apartment parking lot and observed a male matching the description of the driver provided by the witness walking toward them.  The male had cuts and bruises on his hands and a bump on his forehead and was carrying a set of Dodge vehicle keys.  As the officers ordered the suspect to stop, he fled on foot.  As officers ran after him he assaulted one officer with his elbow.  After a brief foot pursuit, the suspect was taken into custody.

Officers found a handgun in Rios’ jacket during the arrest. He is currently being held without bond.