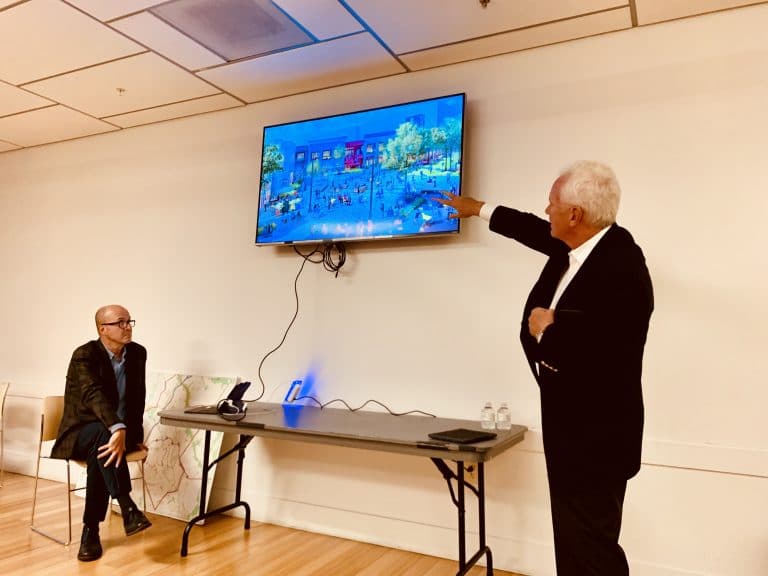 The operators of Downtown Silver Spring will permanently close Ellsworth Drive to vehicular traffic, and lay down nontoxic artificial turf to create what’s described as a “linear urban park.”

Bryant Foulger, chairman of Fougler-Pratt, one of the complex’s owners, presented plans for a $10 million renovation of the area to a generally receptive audience of about 60 people last night.

He noted that the street often had been shut down from Fenton Street to the south for events.

“Over the years, we came to conclude that we just needed to shut it down to cars all the time,” he said.

The asphalt and infrastructure such as curbs and storm water management features must remain, which will maintain access for emergency vehicles, the farmers market and other current uses. In addition, the alley on the southern end of Ellsworth will stay open for access to the Wayne Avenue garage.

The plans include adding color with furniture and seating areas, and fresh paint on the buildings, among other new features.

“We want games—corn hole, ping pong—there are all kinds of really cool ping pong tables out there,” Foulger said. “You’d be amazed how cool they are.

“We’re going to have a lot more people there enjoying this space that up until now, has really been designed and reserved for the automobile,” he added.

There also will be changes to the Fountain Plaza.

In addition, the renovation will include eliminating the current fountain, which is old, breaks down frequently and is difficult to repair. A water feature with a sculptural element will replace it. The exact nature of that feature has not yet been determined, Foulger said, though he noted that children would not be encouraged to play in it.

The temporary stage will be eliminated, and a series of wooden forms will be installed on the plaza area, which can be used for seating when there are no activities.

“In order to do a stage,” Foulger said, “all those [wooden] elements will be built on a rail, and when it comes time to have a stage, all of those pieces slide together like a jigsaw puzzle and they form a stage.”

Other changes are coming to the Gateway Plaza at the corner of Georgia Avenue and Colesvile Road.

In addition, plans call for the removal of about 15 parking spaces along the side of the lot facing Red Lobster and incoming tenant The Eleanor.

The renovation will add curb-height wooden platforms with seating for patrons “so that as people drive by, they can see people,” Foulger said. “People want to be where there are other people, and so we want to engage Colesville Road and Georgia Avenue more effectively.”

When questioned about other potential new tenants, Foulger declined to comment, other than to say that the retail environment is a constantly changing one, and that food outlets would always be an important element.

Some attendees raised questions about the development, most of which involved management responsibilities such as cleanliness and dealing with the homeless population. One issue that was of particular interest was noise, primarily from street preachers with bullhorns and religious groups.

Dan Figueroa of The Peterson Companies, the co-owner charged with managing the complex, pointed out there was a public easement through the development, which limits what the company can do to control the area.

“We have a code of conduct that’s posted that we try to enforce, but you get to a point where somebody doesn’t want to listen to you, they’re going to stay there,” he said. “We try to engage the police to help us enforce that but if they’re not physically breaking the law—sometimes they are—but if they’re not, the hands of the police are tied, too. It’s a hard dynamic to enforce.”

Foulger didn’t provide a timeline for the improvements, some of which will require site plan amendments and approval from the Planning Board.

However, he did note that the companies currently were doing everything that they could that didn’t require a county permit, such as painting the buildings.

In addition, four artists will be engaged to create four large murals on the buildings. It’s all designed, Foulger said, to create a sense of whimsy and fun.

“We want this to be a place where people dwell,” he said, “where they hang out, where they stay.”

Top, Bryant Foulger (right) points out a portion of the new look for Downtown Silver Spring, as shown in the first rendering below  (photo by Mike Diegel). Below, renderings courtesy The Peterson Companies (click on images to enlarge).