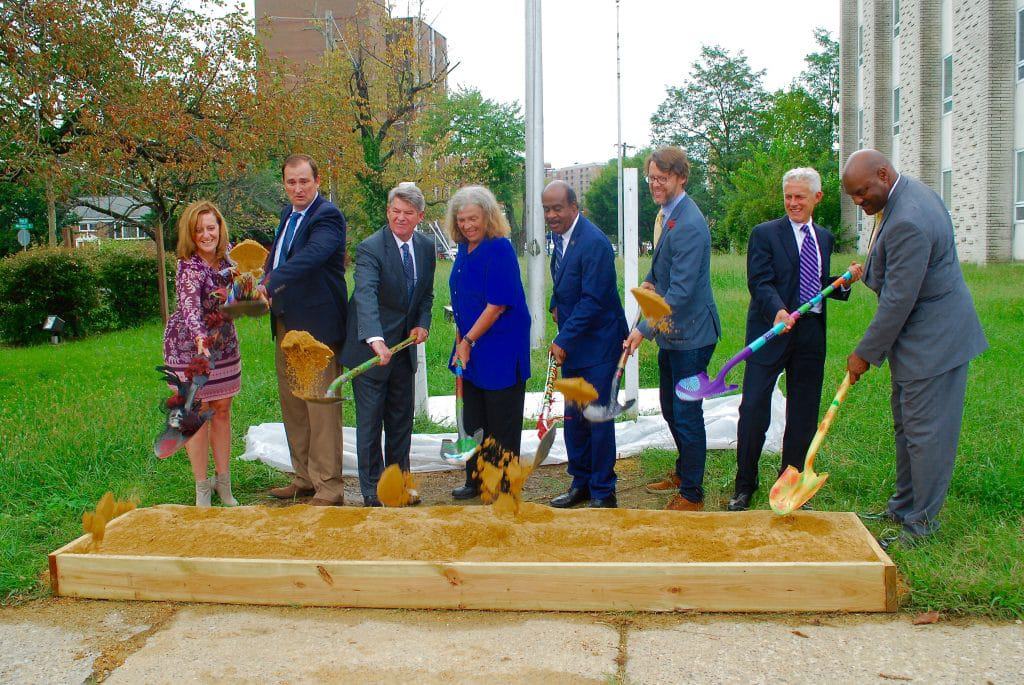 About 100 residents joined county officials and others yesterday for a ceremonial groundbreaking of the Silver Spring Arts Campus on the site of the former 3rd District police headquarters at 801 Sligo Ave.

The organization was selected for this project through a process that included a request for proposals.

The plans include 68 live/work affordable units for artists and other creatives, and will include 19 studio, 27 one-bedroom, 12 two-bedroom and three three-bedroom units. Eleven units will be reserved for veterans (who may or not be artists) and the organization also will build 11 townhomes for sale, seven of which will be market rate and four will be affordable units aimed at the artistic community.

“All of our projects are united in an idea that when a diverse group of artists have affordable and safe and stable space, they have more time to then devote to their craft, their art,” said Heidi Zimmer, senior vice president of property development for Artspace projects, during the ceremony. “They enrich each others’ lives by working together, and in turn, they enrich the community that surrounds them.”

Karen Roper from the East Silver Spring Civic Association, who many give much of the credit for driving the project to this point, talked about the history of how a dream developed over the last 10 years, and the many people who were involved in a sometimes difficult process.

“You knew how to work it out amongst yourselves and speak with one voice, and that made this much, must easier to get through,” she said.

County Executive Isiah Leggett was more direct during his remarks.

“Let’s make no mistake about it. The reason why we are here today is because of Karen,” he said before presenting Roper with a proclamation recognizing her work. “This has been a tireless effort. But the person who led this, who convinced me and convinced so many others around here when we had doubts about it, was Karen.”

Zimmer also gave credit to the community, saying, “You really are a representation of how the public sector, the nonprofit sector, the private sector and citizens all come together for a common goal.”

Erika Dani, Artspace asset manager, said the group expects construction to start in the next couple of months. For now, at the corner of Sligo Avenue and Grove Street the parking lot is closed and will be used initially as a staging area. In the meantime, Artspace is holding meetings to inform people about the project

“Right now, we’re in the marketing phase where we’re letting people know that this building will be happening, that we’ll be constructing it and that it’s open for artist and their families,” Dani said. “The actual application process will start closer to construction completion, which we’re expect sometime in early- to mid-2020.

“We’ll have a pre-application, which is just one page [that] asks for income, it asks who will be living in the unit, if you’re an artist and some other information, and you submit that to our property management company and that gets the full application process started,” she added.

Financing for the project includes about $20 million in debt and equity finanacing from Bank of America, and about $11 million in low-income tax credits.

The laws governing those tax credits dictate that the application process cannot begin until 120 days before the building opens.

“The pre-application process might start a little bit earlier than that, just to give people time to realize what documents they need,” Dani said.

Erin, a Silver Spring-based dancer, musician and composer who goes by one name, spoke on behalf of the artists anticipating the campus opening.

“I know that tools for artistic creation can expand and contract, and having a specific space to have those tools and really settle in is another huge dream that makes this even more exciting,” she said.

“From my own experience, it makes a huge motivational difference to be surrounded by other who share a mutual passion for creation,” Erin continued. “A space like this enables artists to fully develop their ideas, which leads to more compelling and inspiring work.”