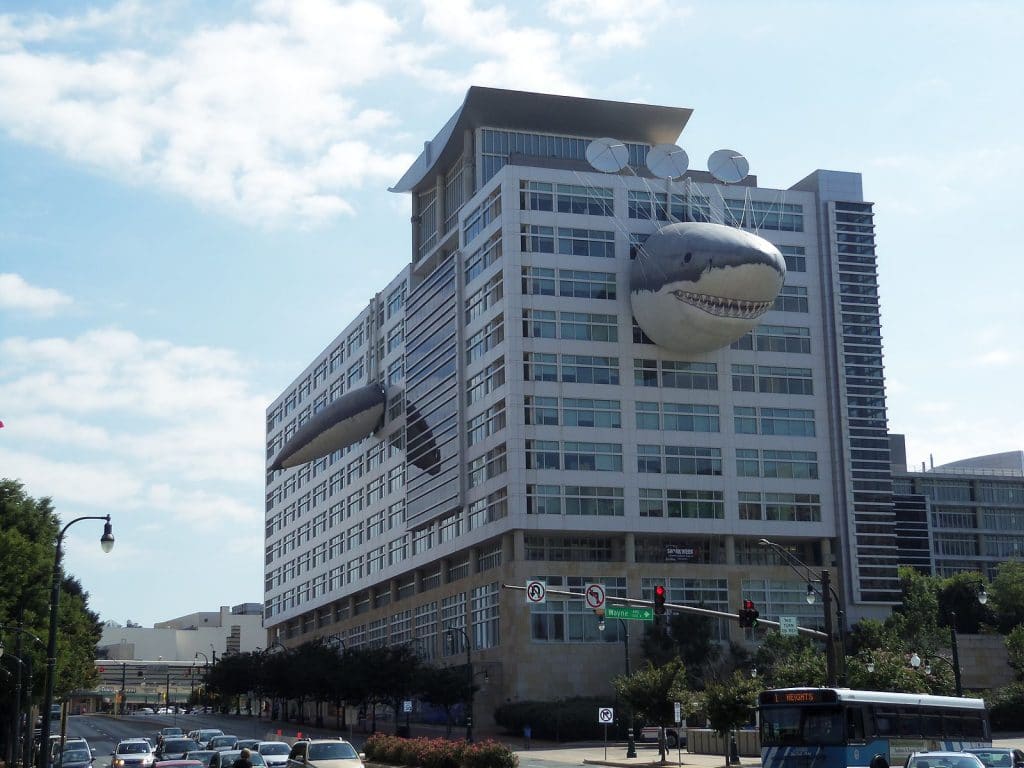 Photo of the Discovery headquarters, which will be vacated in mid-2019, with the beloved Chompie from Wikimedia Commons

A group of county and state officials were among those who came to Silver Spring as preparations get underway to market Discovery Communications’ headquarters building to potential buyers.

“We need to understand the ins and outs of the building,” said David Petr, president and CEO of the Montgomery County Economic Development Corp. “We had a tour there last week with representatives from Discovery. We had a chance to actually walk the physical space to understand the configuration and how it could be broken up into multiple users and really, what the physical offering was.

“We’ve got to determine really how best to tell the Silver Spring story,” he continued, “and it has a great story to tell. Driving that story will be the quality of talent that you can pull to that location, the connectivity of the Red Line Metro and, in the future, the Purple Line. And then we can also leverage the great opportunity that this next user will be right on top of a vibrant downtown that has a lot of momentum.”

“As much as we’re not happy that Discovery’s leaving,” Petr said, “we’re very, very encouraged and optimistic about having this in our portfolio to sell not only to our existing prospects in our pipeline, but as we travel to conferences and trade shows and tell that story, we have really a world-class facility in a great, great city to begin to promote.”

Earlier this month, Discovery announced it would move its headquarters to New York City and also transfer some employees to facilities in Knoxville, Tenn. owned by Scripps Networks, which Discovery is buying.

The company recently engaged global real estate firm JLL to sell its 545,000-square foot headquarters. JLL representatives were along for the tour and will be working on a marketing plan for the property as well.

“It’s an all-hands-on-deck approach to finding a new user for this as Discovery transitions out, so we can keep building on that momentum that Silver Spring has experienced with Discovery being there,” Petr said.

Petr mentioned media-related or technology companies, life sciences, or perhaps a corporate headquarters as possible users, while admitting there aren’t many companies that would be looking for a building as large as the Discovery office space.

In the meantime, MCEDC also is marketing the Kennett Street building that Discovery has occupied since not long after Caldor left in 1998.

“It’s a different product with the same advantages of being in Silver Spring, of the talent connectivity side,” Petr said. “The business development team likes to have good product to share and both of those [Discovery] properties are good products. We’re going to play matchmaker as best we can, as efficiently as we can.”

At the same time, Petr is encouraged by how the local business community, including the Greater Silver Spring Chamber of Commerce, “really want to come together and be part of the extended team to make sure that this building is marketed and filled in an efficient way.”

He also said that meetings have been scheduled with business community and the county to begin discussions on how to best help any businesses that may be affected by Discovery’s departure.

“That’s part of our work that we need to do,” Petr said, “not only recruit a new company, but make sure that the companies that are there are not going to have any significant challenges.

“[Silver Spring] is an exciting, electric, vibrant place that employers want to be able to recruit new talent and keep the talent they have,” he continued, “so [I’m] very much positive in my outlook for Silver Spring and Montgomery County, and I’m challenged with my team to make sure that that happens.”