Vacant space on Sligo Avenue may get affordable housing development

Aerial rendering of the plan for affordable housing on Sligo Avenue.

A long-vacant space at 715-719 Sligo Ave. would become the setting for a new affordable housing development, according to plans discussed last night at a public meeting.

The building developed under a partnership of Montgomery Housing Partnership, whose mission is to expand the county’s quality affordable housing, and TM Associates, Inc., a Rockville-based property management firm would build no more than 71 rental units, according to the current plans.

Ninety percent of those units would be priced under the county moderate-priced dwelling unit program, which is geared to those making 40, 50, and 60 percent of the county’s median income. Median income in 2017 was slightly less than $99,000 per year, according to Data USA, and slightly more than $100,000 per household in 2016, according to the U.S. Census Bureau estimates.

The other 10 percent of the units would be priced at market rate.

The plans call for 18 one-bedroom units, 35 two-bedroom apartments, and 18 three-bedroom units on five floors fronting on Sligo Avenue, with 54 parking spaces underneath. The project’s architectural firm is locally based Knu Design.

There would be a 35-foot landscaped buffer between the rear of the building and the homes on Silver Spring Avenue, and a maximum height of 35 feet facing those properties. The highest floor would rise to 60 feet at the building’s maximum, toward the center of the property.

In addition to the apartments with a lobby, there would be an outdoor courtyard for recreation and a children’s play area. Off the lobby, with a separate entrance, there would be a space for package delivery that could hold lockers from Amazon, UPS or similar service.

The ground floor also would include a multipurpose room for residents and community use.

About 15 people attended the meeting and some of the questions raised had to do with storm water management and the lack of storm drains in the area.

The new building would have a green roof to absorb some of the rainwater, as well as bio swales along the sides of the building and landscaping in the back. A Knu representative said it was yet to be determined precisely how to manage runoff from impervious surfaces or whether, and how, to connect to existing storm drainage.

Attendees also raised other questions that primarily will be a function of the building management, including how to control access to the building or garage, security lighting around the building and how to manage that, considering the nearby residences, and so forth.

Others objected to adding more residents in a neighborhood they view as already crowded.

The current schedule calls for the initial sketch plan to be submitted in the next few weeks. There will be hearings before the Planning Board and additional public meetings as that plan, along with the preliminary plan and site plan, go through the review process.

The group hopes to begin construction in early 2020 and be ready for occupancy at the end of the year. 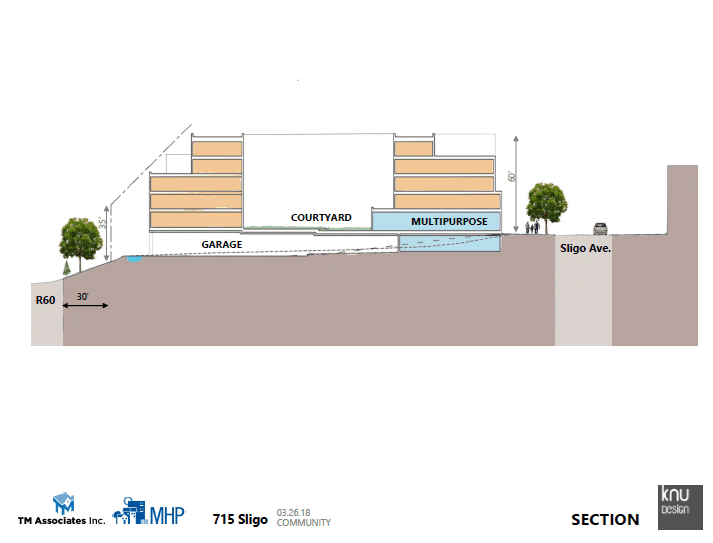