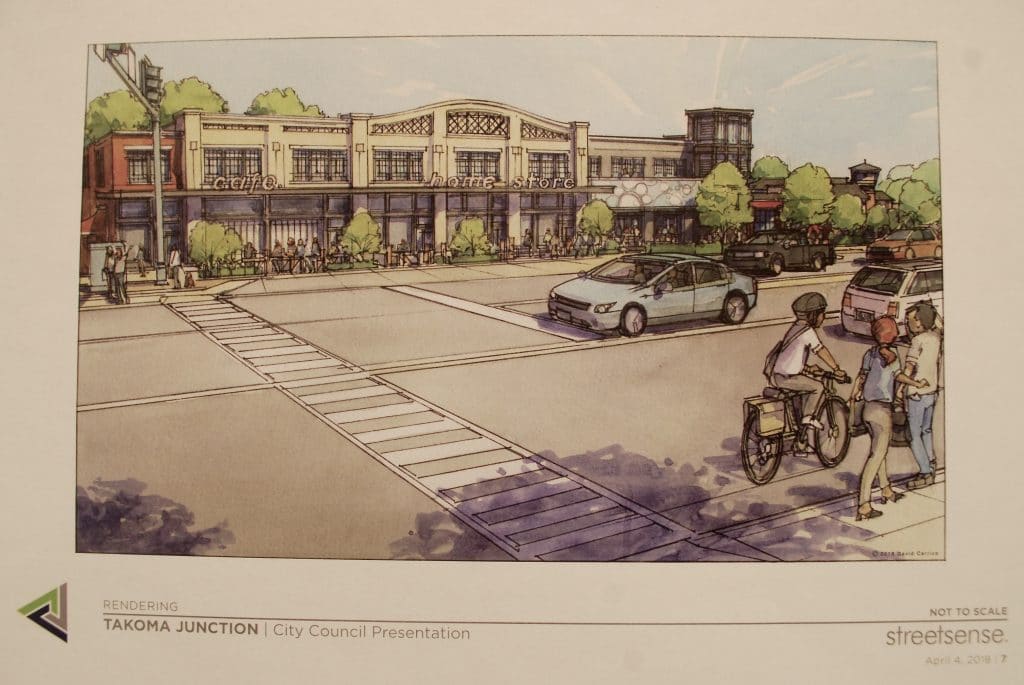 A rendering of the front of the Takoma Junction redevelopment plan, looking  across Carroll Avenue. Photo of rendering by Mike Diegel.

Residents had the chance to review a draft plan for the redevelopment of Takoma Junction at a public open house held Saturday.

The plan encompasses a space at the confluence of Carroll (MD 195), Grant, Philadelphia (MD 410) and Ethan Allan avenues (next to the Takoma Park-Silver Spring Food Co-op market), which primarily serves as a parking lot. Redevelopment of the city-owned property has been under discussion for a number of years, not without some controversy.

“I think there are some people who have expressed concern about the project because, you know, change is scary,” said Kate Stewart, the city’s mayor. “That intersection, the area we call Takoma Junction, already has some traffic issues.”

She noted that the city has been working with the state for a number of years to address the issues and about three years ago, were able to get new crosswalks. Another one is expected to be ready soon, and the city continues to work with the State Highway Administration on traffic issues (on top of an independent study commissioned by the city to look at the overall area).

“But these have all been Band-Aid fixes over the years,” Stewart said. “I do think there are concerns from folks that this area already doesn’t function as well as it should for pedestrians, for bikers, for people in cars, so I think people are questioning doing this redevelopment project—there’s concern, will this create more problems in the future.”

“Our vision for Takoma Junction has been, and really continues to be, a well-functioning area overall, not just really thinking about the redevelopment that goes on,” she added.

For this property, the city executed a development agreement with Washington, D.C.-based Neighborhood Development Company in 2016 to create a project whose goals are (quoting from the city’s website):

The draft site plan includes spaces for a ground floor restaurant and/or café, with street-facing retail spaces along Carroll Avenue and potential office or studio space in the rear of the building. The plan shows another 25,000 square feet of leasable space on the upper floor, with a vegetative roof to help address some of the environmental issues with the site.

In addition to Saturday’s open house, the plan also was presented to the City Council April 4.

“Many of us were glad to see Neighborhood Development Company began to address the concerns we raised back in the fall,” Stewart said.

She mentioned as one example that the area for public gatherings has been increased.

“One of the things that the council had remarked on in earlier conversations with Neighborhood Development Company [was] we didn’t consider [as a] public space outdoor seating for a restaurant,” Stewart said.

As desirable and enjoyable as those areas are, Stewart said, “We wanted to see an area where people didn’t have to purchase something to be sitting there.”

“It gives it a lot more character [rather] than thinking about it as one continuous setback,” Stewart said. “It breaks it up a lot more.”

The additional opportunities for public art with this plan was another positive change.

“We want to make this project one that when someone sees it, they know they’re in Takoma Park and not somewhere else in the region and think there’s some good potential there for that,” she said.

One major change from a concept plan introduced last fall eliminates a partial third floor set back far enough from the street that it would not be visible.

“The idea was that this area could be used as an event space, opening up to the roof area in front, activating what would otherwise be a dead area,” wrote NDC founder and CEO Arian Washington in a letter to the council last October.

“Clearly, we underestimated the uproar that this addition to the plan would cause, and we apologize. To clear up any confusion, the proposed partial third floor is not necessary to make the economics of the project successful,” the letter continued, and the current draft plan reflects that feedback.

The council now will begin to hold work sessions to get into the details of the plan, Stewart said, citing as examples how trash and recycling pickup will work, as well as deliveries to the businesses.

The council will begin to hold work sessions to get into the details of the plan, Stewart said, citing as examples how trash and recycling pickup will work, as well as deliveries to the businesses.

Another issue is the placement of the elevator to the underground parking, which is on the opposite side of the proposed building from the co-op. That, Stewart said, could present challenges for people who have been shopping and are carrying packages back to their cars.

The public can comment on the plans now. The council intends to vote on the plan in May, prior to sending it to the county’s Planning Department for review and approval.

A Q&A about the public benefits and financing is available online for more information.