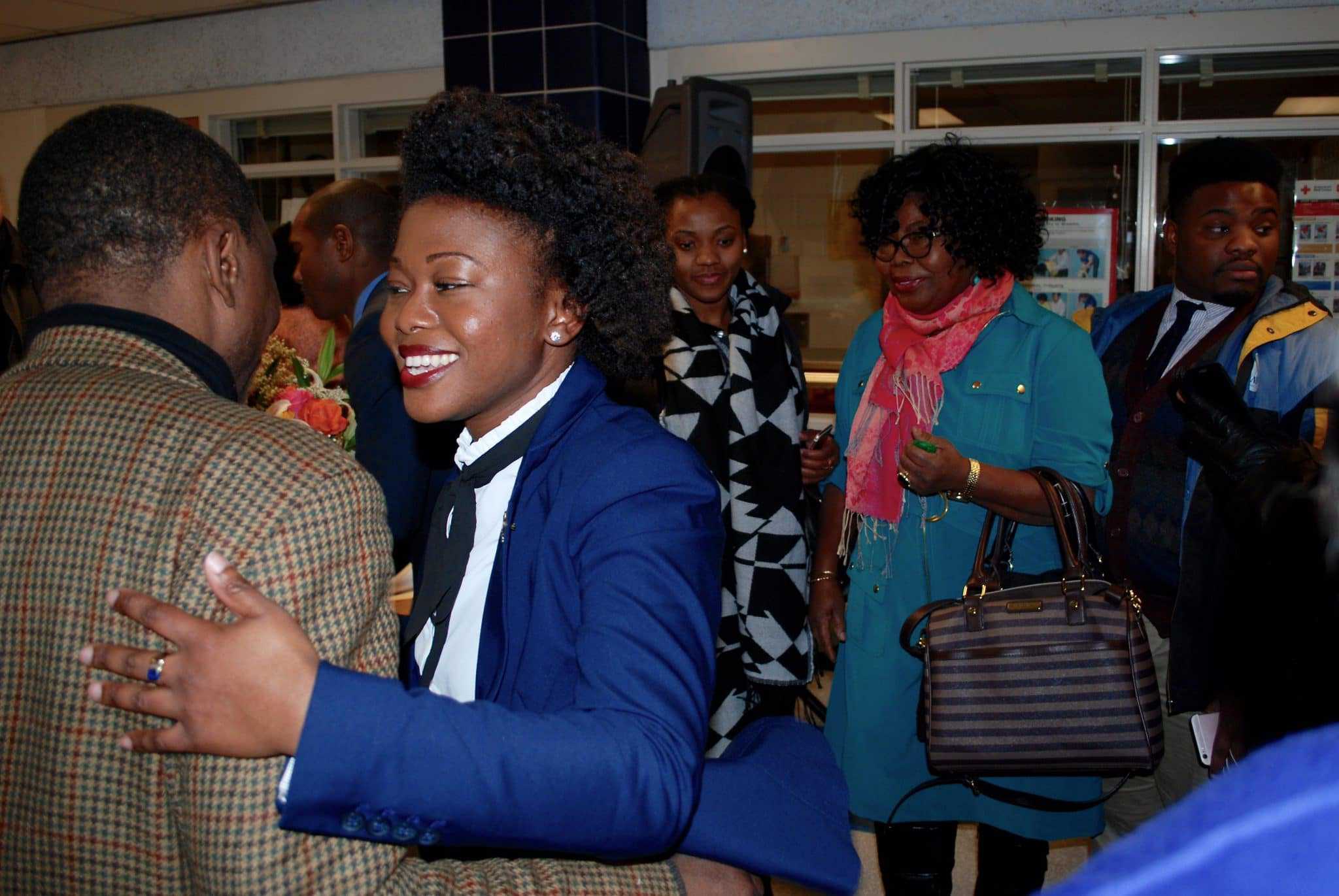 Jheanelle Wilkins accepts congratulations from supporters following her nomination to become a delegate from District 20. Photo by Mike Diegel.

Jheanelle Wilkins, a member of the Montgomery County Democratic Central Committee, was chosen by that group on the third ballot last night as the nominee to fill the vacant delegate seat in District 20.

Wilkins, who lives in Silver Spring, defeated Lorig Charkoudian, executive director of Community Mediation Maryland, by a vote of 19-9 on the final ballot. Candidates Yvette Butler, Amy Cress and Darian Unger were eliminated by rule after the first ballot, while Daniel Koroma was cut after the second ballot. On that ballot, Wilkins received 14 votes and Charkoudian 12, with 15 needed to win.

“I’m still in shock, it was so close,” Wilkins said after the vote. “I’m so grateful to be selected.”

WIlkins, who was elected to the MCDCC in 2014, said she looking forward to working on several issues in the legislative session, including earned sick leave.

“That’s something that’s going to be coming up and I’m looking forward to drafting a very strong bill,” she said.

She’s also interested in legislation to protect immigrants and finding ways for people to keep their health care coverage if changes are made at the federal level.

Charkoudian expressed her gratitude to the committee, adding, “I appreciate all the community members who came out to support me and support the other candidates.

“It’s amazing to live in District 20,” she said, noting how many people turned out for two candidate forums and the vote. “I’m so impressed and so proud and so pleased to live in this district, even though it makes it harder to win a seat because there’s so many high-quality candidates.”

“I’m announcing my candidacy for District 20 delegate in 2018,” Charkoudian said.

In the meantime, Del. David Moon is looking forward to working with his new colleague.

“[Wilkins has] been out there on a lot of the hot issues that party activists have been interested in the last few years, especially criminal justice and the drug war,” Moon said.

“I’ll be very curious now to see which committee assignment she gets,” he continued. “We’re in the midst of a reshuffling in Annapolis and so there’s a lot of fluidity there. I’m excited to start working with her and help her get situated.”

Wilkins’ nomination to fill the seat formerly held by now-state Sen. Will Smith will be forwarded to Gov. Larry Hogan, who will make the formal appointment. The 2017 legislative session will convene Jan. 11.