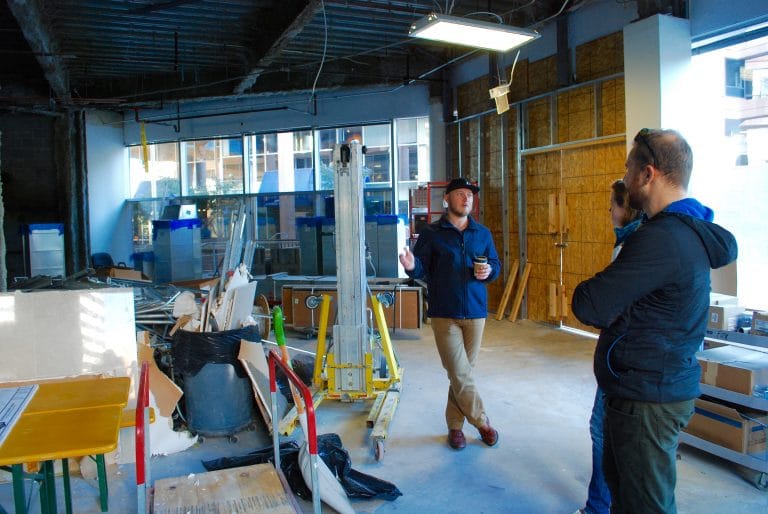 If all goes well, Silver Spring could have its third brewery, Silver Branch Brewing Co., open and operating by the end of the year.

“We’ve targeted a mid-December opening date,” said cofounder Brett Robison. “We’re really hoping that we can open up in time for a little bit of [the] holiday season.”

A major issue was raising a portion of the floor in their space by about three feet to be even with the rest of the space. That area then had to be reinforced with steel beams in order to support the weight of the ten tanks they’ll need for the various parts of the brewing process (one 45-barrel fermenter, which holds roughly 1,400 gallons, weighs close to 25,000 pounds).

The beams were covered with steel plate over which concrete will be poured (scheduled for today), then covered in an epoxy coating for easy maintenance.

They also needed to have a hole cut in another section of the flooring to install a lift to get supplies up from a lower-level loading dock (and then to ship beer out of the brewery).

“We started construction in early August,” Robison said. “I’d say we’re about 50 percent of the way [to completion]. A lot of the really big stuff, like the structural reinforcement and creating the hole for the lift, has already happened.

“I’m actually really excited for the phase when we start to begin bringing in the softer stuff, like the wood and the paint and the mural that we’re going to do,” he said. “That’ll really start to help painting the vision of what we’re going for.”

The mural will be created by a local artist, Rievs Wiley, to fit the brewery’s theme.

“I don’t want to say too much [now] because there’s a reveal moment, so I can’t give away too much, but I’m really excited for it,” Robison said.

The mural will face the bar area and café seating, while another section will include communal tables for groups. There also will be an outdoor beer garden.

In the meantime, the brewery is offering 200 Founder’s Club memberships. There are two levels of pricing and each level has benefits to membership including discounts on purchases, the first chance to buy limited release beers or tickets to special events, Silver Branch branded merchandise and other benefits.

Silver Branch is located at 8401 Colesville Rd., Suite 150 in the Metro Plaza complex.