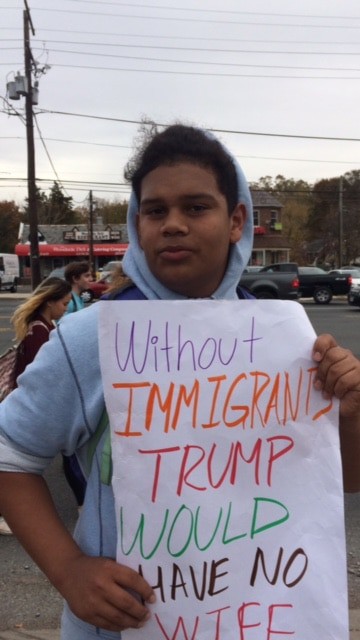 The march began at Blair at 10 a.m. as students headed up University Boulevard toward Northwood High School, where more students joined the march. Police managed rolling road closures to ensure the marchers’ safety, while urging them to stay on the sidewalks.

The group got larger in Wheaton as they turned down Georgia Avenue, heading to Silver Spring. The marchers ended their trek at Veteran’s Plaza in downtown Silver Spring.

According to an email from Blair Principal Renay Johnson, the protest was not encouraged by the school.

“Parents will be notified through our automated attendance system if their child is marked absent from any classes today.

“Students participating in this protest must bring a note from their parent/guardian within three days stating they approve this absence or they will be marked unexcused.  As always, students who choose to leave campus without parent permission will have an unexcused absence. (emphasis in the original)”

Here’s a short video of the students walking along Georgia Avenue, courtesy of Lisa Sanders.