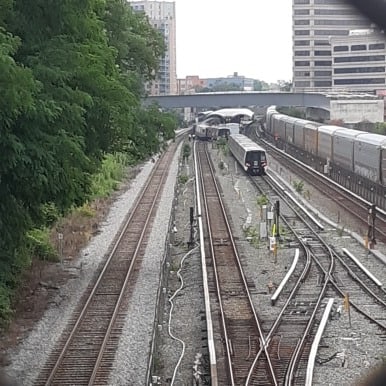 Service on Metro’s Red Line was interrupted by a derailment at the Silver Spring station shortly before 11:30 a.m.

A statement posted by the Washington Metrorail Safety Commission, posted on the organization’s Twitter page, reads, “Preliminary information suggests the eight-car train passed a red signal prior to the derailment. The first car of the train entered a center storage track, known as a pocket track, while the second car of the train appears to have continued moving in the direction of Glenmont.

“The pocket track was already occupied by a train that was out of service. The lead truck (front set of wheels) on the second car derailed, and the second car appears to have made contact with the first car,” the statement continued.

Reports indicated that 32 people, including the operator, were on the eight-car train. All were evacuated safely and there were no injuries, officials said.

Service disruptions are expected through the evening. Shuttle bus service is available at the Silver Spring, Takoma and Forest Glen stations.