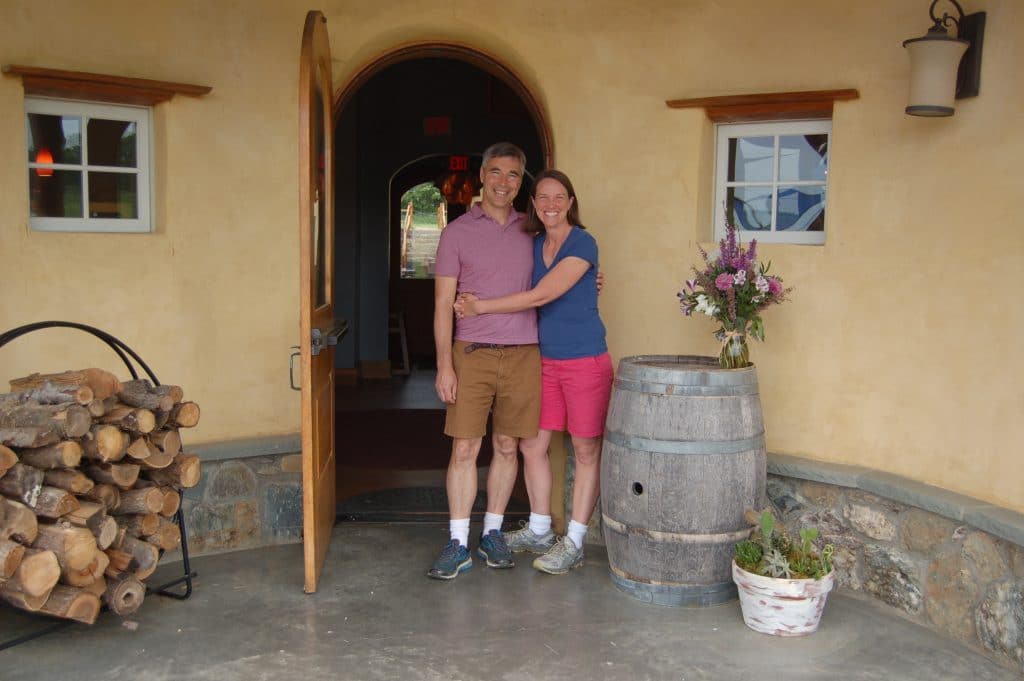 One of Maryland’s best—and best known—wineries is owned and operated by a couple who live in the North Hills of Sligo Creek neighborhood of Silver Spring.

Sarah O’Herron and Ed Boyce bought the land outside of Mt. Airy that became Black Ankle Vineyards in 2002, planted their first 22 acres of vines in 2003 and 2004, harvested their first grapes in 2006 and opened the tasting room with their own wines in 2008.

When the two decided to leave their jobs in the consulting world where they met, they spent some time thinking about what would be next for them.

“We wanted to do something different,” O’Herron said. “We’re pretty adventurous, we like food and wine, we like travel, we like to be outside, we don’t mind getting dirty. It was just like a combination of factors.”

The two spent a lot of time considering what could work, did a lot a research on wine and winemaking, and “the more research we did into it, the more that we thought we could make some really good wine in this area, the more intriguing the idea became,” O’Herron said. “And then we just took a leap.

“I have a very clear memory of sitting in two chairs in our back yard saying ‘Okay, we’re each going to make a private list of pros and cons and do we or don’t we, and then, what do you think?’ and we came out with yes,” she added.

The Black Ankle farm is about an hour away, but the couple decided to stay in North Hills, which is roughly bounded by Colesville Road on the east, the Beltway to the north, Sligo Creek on the south side, and Sligo Creek Golf Course to the west. O’Herron grew up in Silver Spring and they’ve lived in their current home about 19 years.

“It’s just our home,” she said, noting her family close by and the long-time friendships they have, “and we didn’t want to give that up.”

The Black Ankle farm is about 150 acres of land, of which close to 60 acres are planted with about 80,000 vines, and the winery only uses grapes that are grown on site.

Now, though, they plan to expand, first to a new farm, Live Edge Vineyards, which is close to I-270 near Clarksburg, and to another property they’ve purchased outside of Westminster, Md.

The two new farms total about 400 acres; part of the reason for the expansion is so Black Ankle can continue to make wines and meet the demand using only their own grapes.

“We’re always first and foremost, driven by the soil,” O”Herron said about the Live Edge purchase. “Clarksburg is just a great place to be. There’s some agricultural land and we found this beautiful farm, and it’s near people.

The couple planted the roots on the Clarksburg property in 2018 and will graft the vines in the field this year.

“There are certain grapes that will grow great there,” she continued. “There’s some grapes that I don’t think will do as well there and that’s why we bought this third property . . . that’s where the rocks are that we needed.”

Back at Black Ankle, the couple has one fulltime person in the vineyards, and added 13 seasonal workers this year. The tasting room employs four fulltime people, and more than 40 people work part time in sales and in running the tastings.

The two share the responsibility for overseeing the winemaking after both did a lot of the upfront vineyard work growing their grapes. When their children were younger, they typically alternated child rearing with working days on the farm.

Black Ankle farm now is almost as well known for its sustainable approach to the winery as it is for the products.

For example, the walls of the tasting room and winery are made of straw bales, clay, wood and stones either grown or found on the property. The roofs include solar panels and a “living” roof, and the heat comes from a geothermal system.

Black Ankle has been a long-term project, and the couple expects the same on the new farms.

“The planting and cultivation of the grapes is a huge investment, so we have to do it over time,” O’Herron said. “Right now, if everything goes swimmingly, we’ll open the Clarksburg property in 2024.”