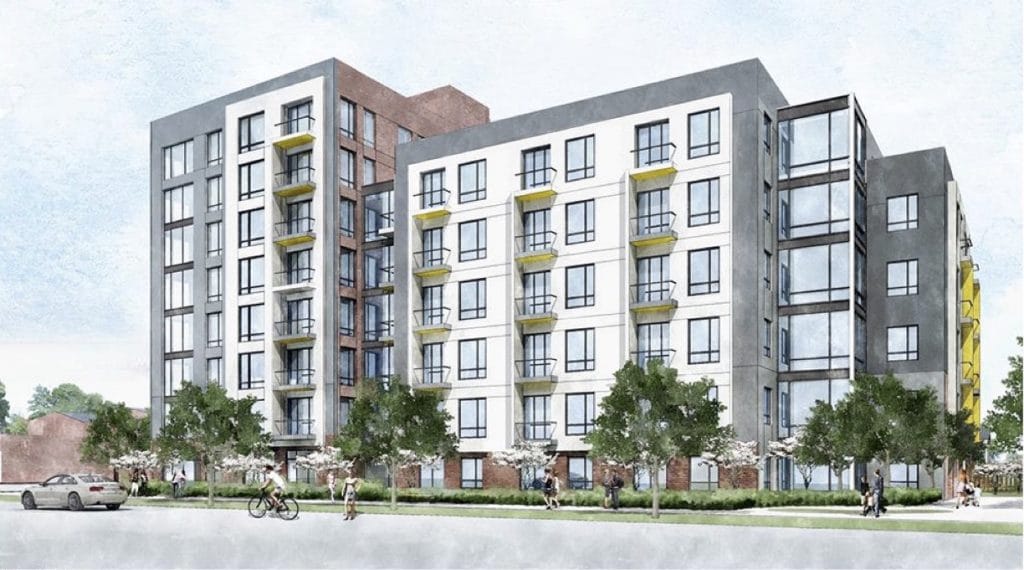 Representatives of Moonlight Inc. on Monday night previewed changes to the plans to redevelop and add new construction to a former office building at 850 Sligo Ave.

The existing building, which has been vacant for nearly two years, will be converted to apartments; new additions will add units to bring the total to 86 apartments.

The plans call for consolidating the current four entrances to the property to two. One will lead off of Sligo Avenue to an underground loading dock. The second will turn off of Gist into a below-grade parking garage with 33 spaces for residents.

Attendees at the meeting again expressed concerns about parking, raised at an earlier meeting, as well as interest in keeping cars from exiting the parking garage and turning left on Gist into the neighborhood.

Moonlight’s representatives assured attendees that the parking exit would be designed in a way that won’t allow left turns.

And while the area has parking restrictions on residential streets, the attendees noted that there’s little enforcement by the county and fear new residents will add to the street parking problem.

Other changes reviewed by architect Jack Devilbiss of Bonstra Haresign include adding walk-up units to a new building at the back (facing the existing single-family homes), as well as a walk-up on either side of the residential parking garage, to help activate the two areas.

The buffer area also will be gated for security and so the new green space will be reserved for residents only.

The new building also will be lowered to about 33 feet tall where it abuts the homes on Gist, rising to about 40 and then 50 feet. Portions fronting on Gist and Fenton will be 55 feet tall, with additional setbacks leading up to a maximum planned height of 60 feet (compared to 99 feet for the existing building).

The plans also call for new trees to be planted along the streets, non-slip bricks for the walkways, and a corner park at Fenton and Gist that will include seating and public art, possibly some type of wind sculpture.

Some who attended the meeting also pushed for a mural to be added to the existing building when the discussions turned to how to make the existing brick look more compatible with the neighborhood.

Stacy Silber, a land-use attorney from Lerch Early & Brewer working with the owner, said the site and preliminary plans would be submitted to the Planning Department by the end of the month to begin the next phase of public review and the approval process.

The project lies within the Montgomery Blair and Northwood high school clusters affected by a residential development moratorium declared earlier this year by the Planning Board.

However, Silber said, it’s possible the board could approve this project, or approve with a condition under which the developer could not pull permits and begin construction until the moratorium is lifted (possibly next year).