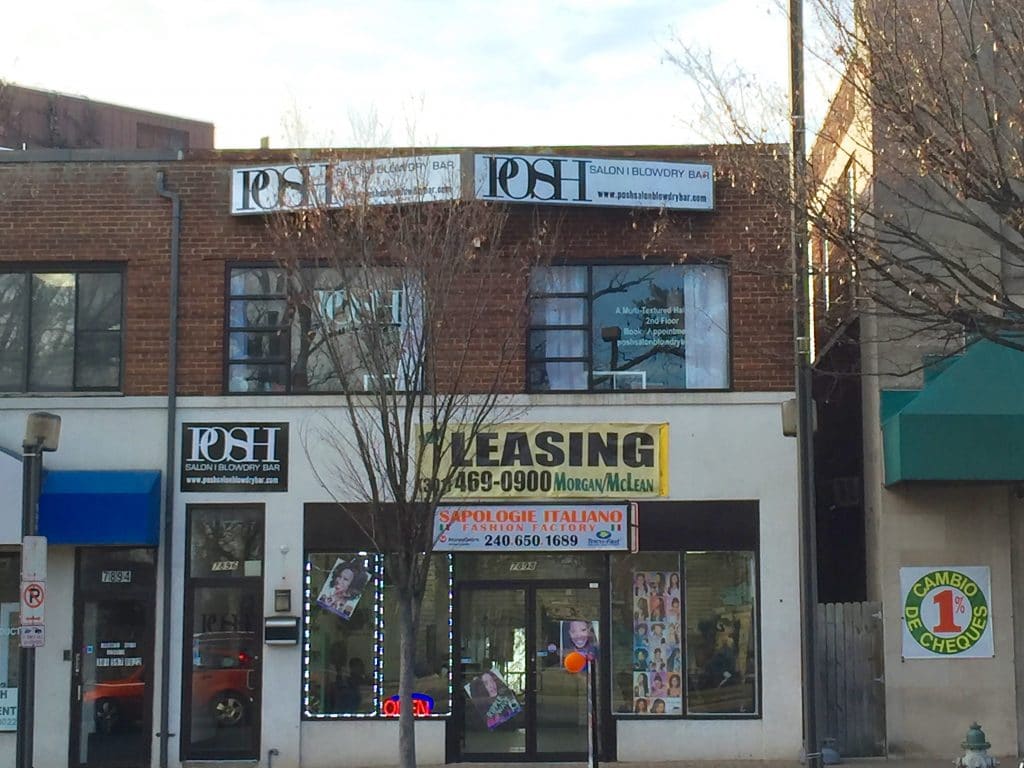 The new salon will be located across the hall from Posh. Photo by Mike Diegel.

A Silver Spring entrepreneur is planning to open a men’s grooming salon on Georgia Avenue near the District line.

Alarice Vidale de Palacios signed a lease in November for Kyngz Salon Lounge to occupy space on the second floor of 7896 Georgia Ave.

“We all know that right now, males are very big business,” she said.

“I really wanted to come up with something that infuses music,” Vidale de Palacios said about the salon’s concept, which has its roots in her upbringing around recording studios.

“The great thing about this salon that makes it different is it’s going to really be emulated after an old-time recording studio” she continued. “So when you walk in there, the closets are like pseudo-recording booths. You’ve got great little memorabilia that’s on the walls; I’ve shopping for old records and different things like that”

The decor will include microphones and stands, amplifiers and similar objects.

The concept is a test for what she hopes will one day be a series of franchised salons, so she’s looking for additional space in Baltimore and in the District for two more lounges to provide proof this idea works.

“We want to offer a franchise that’s not expensive,” she said. “A lot of these brand-name franchises [are] $175,000, plus you have to go to training. We really want to link it to the community where women and men who are thinking about becoming business owners can have an affordable franchise that will work for them.”

Kyngz will be the third business Vidale de Palacios operates in Silver Spring. She owns Consulta, a support brokerage located in I/O Spaces on Fenton Street.

“We work and represent families that have individual who have disabilities at home,” she said. “We work with the state so that we can get them transitioned into a program that’s called self-direction where the family then secures the money that Maryland is paying to vendors and they provide that to the families, so that’s a great way to kind of give back to the community.”

Plans call for Kyngz to open the weekend of Martin Luther King Day in January, offering manicures, pedicures, facials and body waxing. One of the lounge’s special features will be Law Enforcement Day every Monday, when officers can get free services.