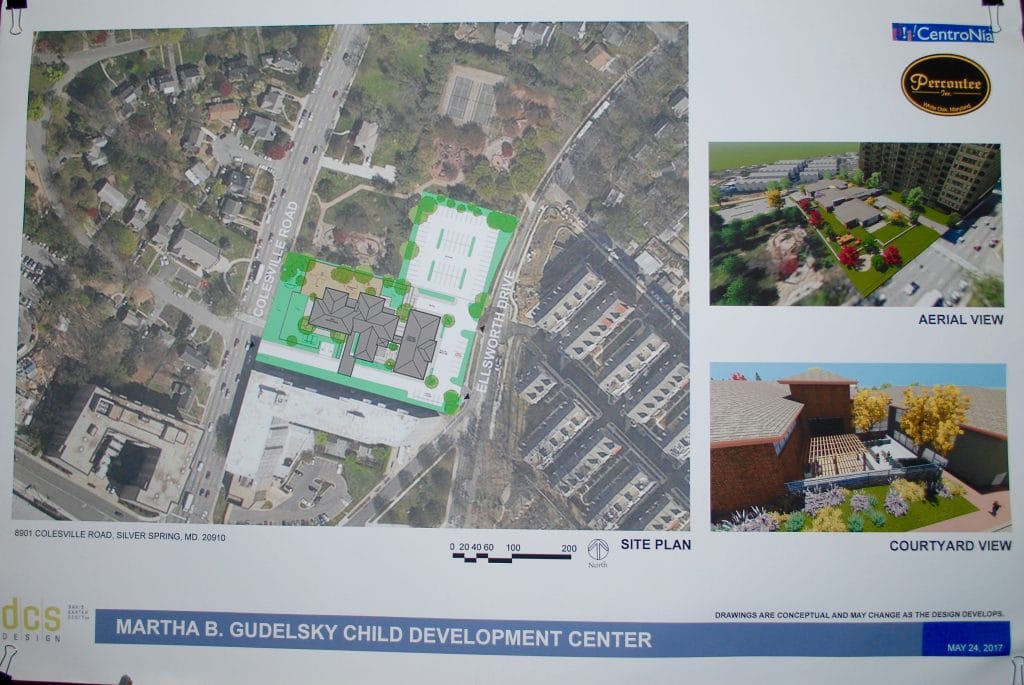 The current site plan for a proposed child development center.

The former Silver Spring library on Colesville Road would become a child development center under a proposal presented last night by one of two finalists in the Requests for Proposal process.

The Martha B. Gudelsky Child Development Center Inc. would be operated by CentroNia, which runs similar facilities in Takoma Park and Columbia Heights.

“We are looking to serve probably close to 150 children,” said Myrna Peralta, CentroNia’s president and chief executive officer. “The facility itself will have community space. CentroNia has a history of all of its centers becoming part of the community in which they sit.”

The center would serve children from 0-5 years old in an intergenerational, mixed-income setting and expects to add about 50 full and part time jobs. They also will offer after-school activities, and the community space will be available for evening events.

In addition to providing childcare services, the RFP had increasing affordable senior housing “in the Silver Spring Area” as a top objective. This proposal calls for that objective to be met by providing 15 units off site, most likely subsidized for households at or below 60 percent of the area’s median income.

“If we were going to honor the legacy of the space, the building, the green space desire, if we did not want to block the view of the new residences across [Ellsworth Drive]—trying to do both [child care and senior housing] on that small site, and doing them well, was not going to be feasible,” Peralta said.

CentroNia expects to serve children from families who live around the site. She also noted the number of businesses within walking distance, many with service workers, who are likely clients as well. The group had done a feasibility study of the need for childcare services in the area several years ago, and intends to conduct another if selected.

“One of the things that we believe is that children don’t develop into good citizens if you isolate all the poor here, all the rich here,” Peralta said. “We believe in a mixed community of our children, and so access to our program will be mixed income.”

MBGCDC will offer its programs and undertake the building’s capital improvement needs at no cost to the county.

“We will be funding this project 100 percent,” Peralta said. “We will not be applying for federal dollars, for Freddie Mac dollars, for Maryland state dollars. This will all be funded by the private donations of the family foundation.”

The Homer & Martha Gudelsky Family Foundation, Inc. was set up by the couple, long-time Silver Spring residents, and has supported projects such as the AFI Silver Theatre restoration. The foundation will fund this redevelopment and part of the programming (with grants and parents fees also contributing), as well as any needed subsidies to meet the commitment of 15 affordable senior housing units.

“We were born on Fenton and Colesville,” said Rita Regino, one of the Gudelsky’s five children and president of MBGCDC, “and lived our entire lives five blocks from the library. It’s the perfect place to continue my family’s legacy.”

The MBGCDC presentation is available online and the public is encouraged to submit comments. Those will be included in the Department General Services report to the county executive, who will make the final decision between the two proposals.