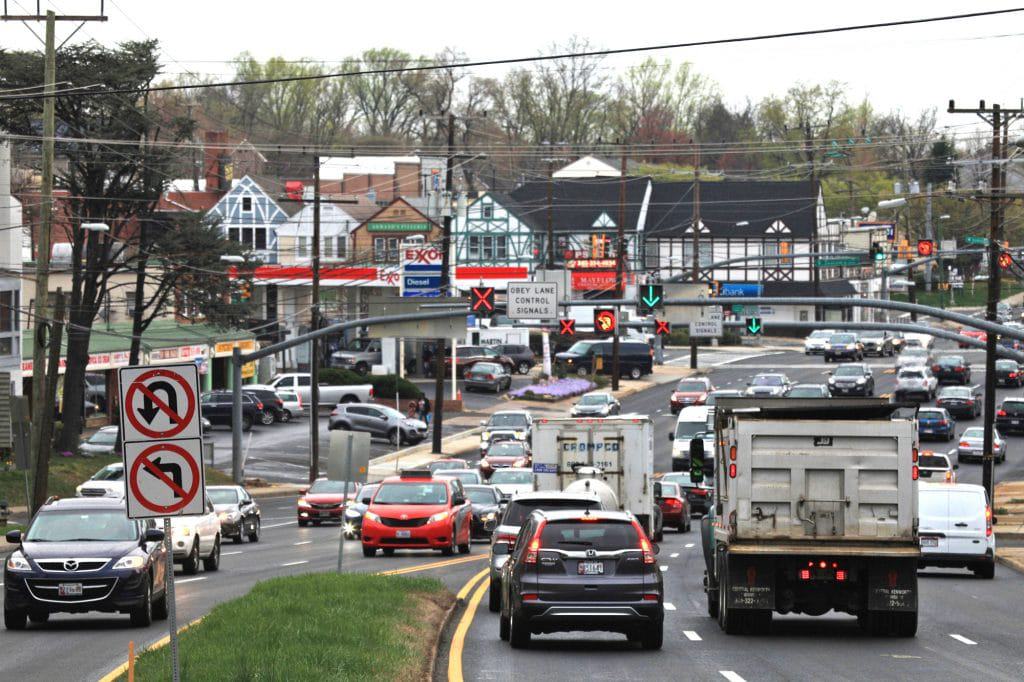 A group of local residents from neighborhoods along the Georgia Avenue corridor between 16th Street and Forest Glen is planning a community charrette next week.

The meeting is intended “to consider the issues facing Montgomery Hills (traffic, safety, economic stagnation, unsightliness, and a lack of place) and build a collective vision for the future of Montgomery Hills,” said the invitation.

The charrette is being organized by Michelle Foster, who lives on Luzerne Drive on the border of Woodside Park and Woodside Forest civic associations, Geoff Gerhardt, an activist from North Woodside, Corinne Hart of the Dale Drive Safety Coalition (and president of the Woodside Park Civic Association), and Partap Verma, founder of Friends of Forest Glen.

The group also expects representatives from the State Highway Administration, the county’s Department of Transportation and the Planning Department, and has invited the Parks Department to participate in Tuesday’s meeting.

The group has teamed up as Friends of Forest Glen & Montgomery Hills, because, Foster said, they realized that the neighborhoods’ issues had much in common.

“One of the primary concerns is that Montgomery Hills in particular has just been in a steady state of decline for the last 30-plus years,” Foster said. “The issues that the whole areas faces with regard to walkability, retail and businesses that actually serve the surrounding communities have really gotten worse instead of better, and I think that everyone felt it was really time to become engaged and make that better.”

She pointed out the high vacancy and turnover rates among the businesses that are there as one issue. In addition, she said, there’s been a lack of investment by the many small property owners (most of whom are absentee landlords), recent makeovers of Aldi’s and Famous Pawn Brokers being exceptions.

“Other than that, the landlords have not made any investment whatsoever in these properties. They’re really fairly dilapidated and they’re outdated, which is almost even more important,” Foster said. “If you’re a restaurant and you come in, you don’t have that big window front where people can see, oh, there’s a lot of people eating there, maybe I want to go in there.”

“They’re really a minority. A lot of the businesses are geared toward the commuters going through the corridor,” she said. “I don’t think anyone is actually opposed to those businesses, but they’re the overwhelming majority. That’s why we have five gas stations and four dry cleaners.

“You’re surrounded by some of Montgomery County’s neighborhood gems,” Foster continued. “Why is it the case that this small little retail, commercial area that had always ben designed to be the community center of these neighborhoods, why is it not thriving?”

Some of the issues are infrastructure ones, like a lack of sufficient parking, she said, though no one thinks the solution is to create more parking spaces.

“The solution to that is to be able to have all of these residents that are nearby to be able to walk to those businesses,” Foster said. “It feels really uncomfortable and stressful to walk along Georgia Avenue.”

The volume and speed of traffic, congestion, difficulty crossing the street and high number of accidents all contribute to the feeling, she said. Aesthetically, there are no street trees to provide shade and a softer look to the corridor.

One business along the corridor that periodically generates a lot of debate on the local listservs is the Montgomery Hills Car Wash, which Foster said contributes to both the traffic congestion and walkability issues.

“The car wash staff is literally walking into the middle of the street to stop traffic to help the cars coming out of the car wash to make a left-had turn [northbound on Georgia], which is very unsafe,” she said. “They shouldn’t be facilitating that with their staff.”

She also thinks that the location of car wash is no longer an appropriate use of that land.

“Because of the traffic that it generates, you’ve got traffic backing up on to the Beltway every weekend that it’s nice,” Foster said.

In addition, the drainage of soap and water buildup on the sidewalk in front, whether the car wash is open or not, creates a hazard for walkers, she said—slippery in warm weather, frozen in the winter—and also discourages people from using the pedestrian bridge that connects Montgomery Hills and Forest Glen.

But some people disagree that the car wash is a problem.

“I like the service and it is provided in the neighborhood,” Melissa Greenwald wrote on one of the listservs. “Perhaps we could consider focusing on working with the business owner to improve challenges people face. It is by definition not a glamorous business, but one that is helpful to some of us who don’t want to drive 8-10 miles elsewhere.”

“I personally like the car wash. They do a great job a reasonable price, and it’s convenient,” wrote Penelope Taylor. “George Avenue gets backed up in that area even when the car wash isn’t open. Let’s not blame one business for the larger traffic woes.”

Those woes and other issues will be discussed at the charrette, which will be held Tuesday, June 12 at 6 p.m. at Grace Episcopal Church, 1607 Grace Church Rd. Pizza will be provided and attendees should RSVP for the meting.