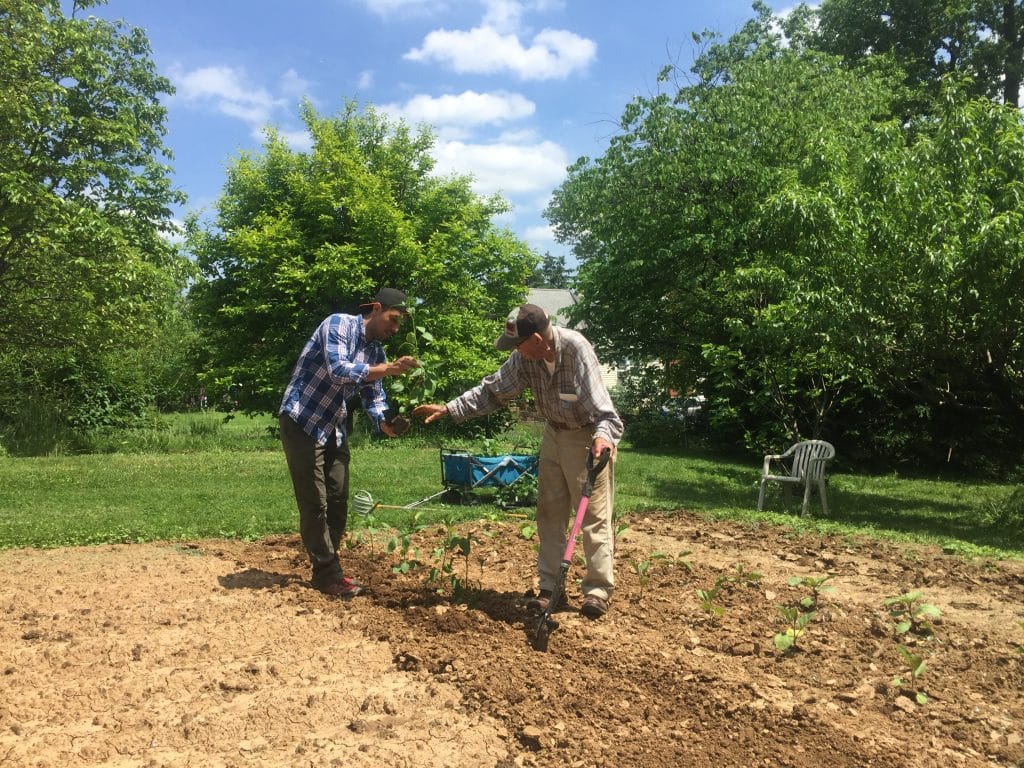 “Old farmers never die. They live on in the tenderly nurtured soil and in the future promise of their seed.”

Charlie passed away in the comfort of his home on the evening of Friday, Jan. 18 at the age of 98. He is survived by his daughter, Lynn Koiner, his farmhands, Evelyn Jemionek and Hannah Sholder, his cat, Hank, and his beautiful farm that will be protected and cared for by The Charles Koiner Center for Urban Farming.

CKC Farming is a 501(c)(3) land trust, created in honor of Charlie to preserve his farm, and others like it, so that generations to come can enjoy the many benefits that urban farms bring to a community.

Charlie was born in 1920, in the kitchen of his family’s home on their 33-acre fruit and vegetable farm.  As a child, he helped work the farm and recalls hunting rabbit and squirrel for dinner…”pot pie,” he says, “now that was good eatin.’”

Charlie attended school at the now historic Montrose Schoolhouse and remembers horse and buggy traveling along Rockville Pike. He purchased his first car in 1940 for $400 using money he earned as a caddy at a nearby nine-hole golf course (now the site of White Flint).

Throughout his life, Charlie managed to stay true to his farming roots. I suppose that’s why he was so disheartened when his family sold their farm in the ’50s to make way for the Mid-Pike Plaza shopping center (now the site of Pike & Rose).

Charlie spent his career as the farm manager at Timberlawn Farm. The estate was owned by George Calvert Bowie and Hattie Corby Bowie. In an interview with Bethesda Magazine from 2010, Charlie recalls his time managing Timberlawn Farm:

“When I married Helen, we moved from my parents’ farm into a house on the Bowie estate. They rented the main house to the Shrivers from 1961 to 1979. When [Sargent Shriver] was running for Vice President [in 1972], the Secret Service had a trailer out there. Before and after JFK was killed [in 1963], John-John and Caroline [Kennedy] would come out to visit their cousins, ride horses, swim in the pool. I’d take the tractor and sleigh and drive them around in the snow. John-John didn’t want to be in the sleigh, he would climb up on the tractor with me.”

In 1979, Charlie retired from Timberlawn and moved to downtown Silver Spring. In the years that followed, Charlie planted beautiful vegetable gardens and took notice of the vacant adjacent plots. He planned to buy up these plots when he could—and that’s exactly what he did.

As the city of Silver Spring grew, so too did Charlie’s property taxes. By 2015, Charlie was paying over $20,000 a year in property taxes, but the farm was only bringing in about $5,000. Once again, it looked as though Charlie was going to lose the farm.

However, by 2015, the farming industry was changing—an urban farming movement was sweeping across the country and the desire for local food had never been greater. Charlie’s daughter, neighbors, friends and elected officials came together and in March 2017, the Montgomery County Council unanimously passed the Urban Agriculture Tax Credit Bill. The bill was sponsored by Councilmember Tom Hucker, who remains an ardent supporter of Koiner Farm and others who wish to follow in Charlie’s path.

While the tax credit allowed the Koiners to hold onto their property, it did not ensure the long-term protection of the farm. This was of particular concern to Charlie’s daughter, Lynn, who on several occasions had expressed how important it was to her that her father’s farm never be paved over or built upon.

With the blessing of Charlie and the wishes of Lynn, Kate Medina (a Koiner Farm customer and local teacher) and Hannah Sholder (a Koiner Farm volunteer and independent consultant) founded CKC Farming, a nonprofit land trust with a mission to inspire the next generation of sustainable food innovators through farm-based, hands-on education.

CKC Farming is currently working with the Maryland Environmental Trust to co-hold an easement that would protect Koiner Farm indefinitely for the purpose of agriculture and education. This will be a first-in-kind for both CKC and MET, given that agricultural easements have traditionally been reserved for properties of at least five acres.

I suppose it shouldn’t come as a surprise that Charlie, in his quiet, unassuming, extremely hard-working manner, has managed to change the way that we think about food and farms.  In November 2018, Montgomery Magazine named him Montgomery County’s First Urban Farmer.

He was proud of this honor, and rightfully so. For decades, Charlie had faced great financial and social pressures to sell his farm, but he never did.  And now, because of sacrifices he made, our generation and our children’s generation have this magical little farm right here in the heart of our city.

May we all be so lucky as to find our passion in life and stay true to it for nearly a century.

In loving memory of Charles Koiner.

Guest post from Kate Medina and Hannah Sholder. Photo of Charlie Koiner with intern Jeyson Ruiz on the farm by Kate Medina.