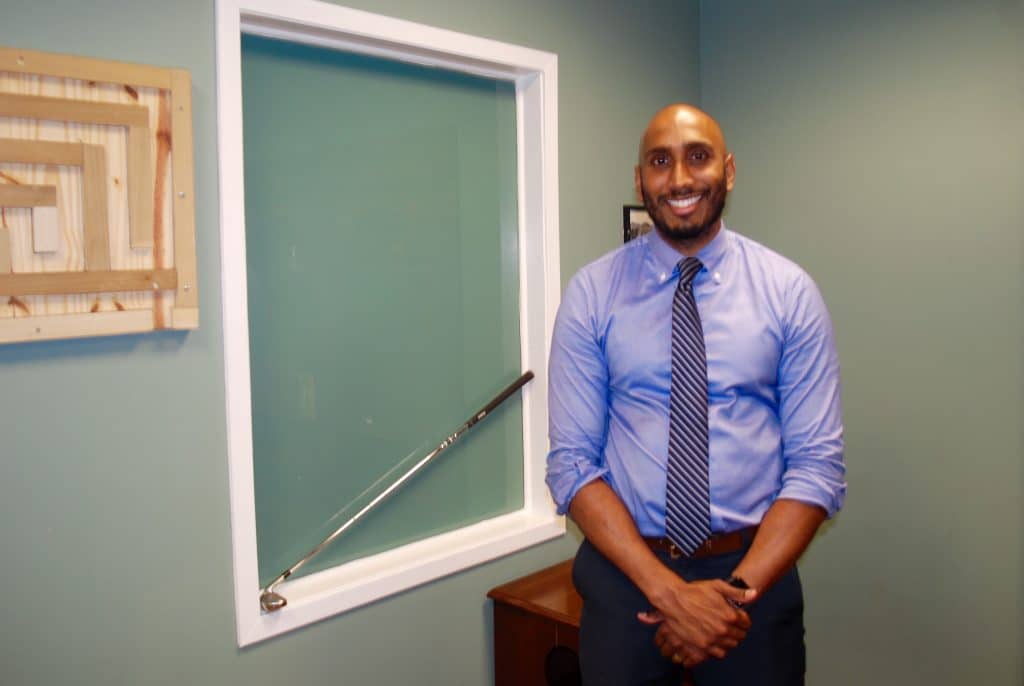 About 40 people turned out last night for the grand opening and a chance to play a game in Big Escape Rooms in downtown Silver Spring.

Located at 8505 Fenton St., #210, Big Escape Rooms offers what owner Sharath Mekala describes as an immersive entertainment experience that can also offer insights into the participants.

While this is his first venture as an owner, it’s not his first experience with escape rooms, he said.

“One of my college buddies has one that’s in Atlanta and one that’s being built in Toronto, and I’ve been enthusiastic about escape rooms ever since I was in the start-up tech world and worked for Tesla,” he said. “We used to do that for team-building events.”

Mekala then decided to work with his friend to learn the business before striking out on his own.

“I absolutely love it and it’s transformed into something even greater, as far as meaningfulness to what it does to people when people are inside these rooms,” he said.

“The main two drivers of this business are birthday parties and corporate team building events. Obviously, birthday parties—people are searching for something unique to do, something that’s extremely immersive,” Mekala said. “It seems like for experiences, it’s kind of trending toward more immersive experiences, very different from watching a movie where you sit back and watch characters playing a role. This is kind of like a movie that’s designed around you.”

The escape room experience also has value when it comes to building teams.

“What happens in it that seems to be extremely valuable to teams and managers and supervisors is the ability for it to transform people where outside in the real world, we might have our own biases that might reject certain people’s ideas,” Mekala said. “If they come up with something, we might say ‘Oh, this happened to me, it’s probably not going to work again.’”

“But in an escape room, you’ve got conditions of an hour setting, you’ve got an hour time limit, so people’s inputs and opinions can be valued and the whole question of ‘What if?’” he continued.

“The possibilities of something, or some person’s opinion of trying to get out—could I actually get you out of the room?” Mekala added. “So there’s this idea that people can find their strengths and their natural gifts, and to shine while unlocking some of these puzzles.”

Essentially, escape rooms are “adventures in which players find clues, crack codes and use their sleuth prowess to solve a series of puzzles within 60 minutes to escape a themed room,” according to the website.

The Silver Spring version features three themed rooms of varying levels of difficulty: Clown (“You and your friends have been trapped in an abandoned circus by Boris, a crazed serial killer clown.”), Pharoah (“It’s the biggest archaeological find in history. Filled with gold, jewels, and priceless antiquities, the world is eager to see the artifacts in all their glory.”), and Outbreak (“Set in the not-so-distant future, the deadly Ileus virus has swept the earth, wiping away millions of people and leaving the world in utter chaos.”).

Mekala brought these concepts, which also are in the Atlanta version, and opened the business here (after living in places such as Atlanta, Tokyo and San Francisco) because he’s originally from Silver Spring.

“Montgomery County was something that I believed helped shape my childhood,” Mekala said, “helped shape the rest of my life because there’s definitely a power of inclusion here, diversity, there’s a lot of obviously educated people here, respect for education. Transportation and things that are planned around this area are thoughtfully done, and so that’s at the very core. This is something I really love—being back home.”

It didn’t hurt that his wife, Arjoo Bhandari Mekala, also is from the area; they settled about three blocks from the business.

Mekala also has tapped into the local community, including high school students, and the theater scene for his hiring.

“A lot more of the performance aspect that might not be in everyday escape rooms but ours—it’s only fitting that we plug into the theater world for people who can do lighting and set design to people love performing in front of people,” he said. “My team is very enthusiastic about the performance aspect.”

All the escape games have a minimum of two players and a maximum of 10, and catering is available for events. Big Escape Rooms is open from 9 a.m. to midnight every day.