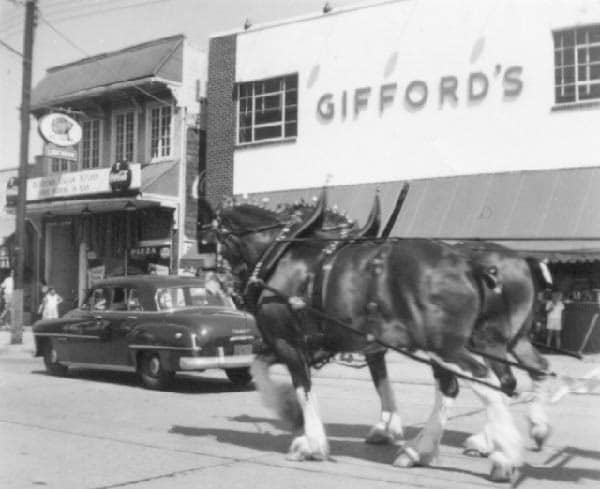 Anyone who hasn’t heard the story of how Silver Spring got its name can learn that and much more about local history Sunday at a free screening of “Silver Spring: Story of an American Suburb.”

AFI Silver Theatre and Cultural Center is hosting a 15th anniversary showing of this 88-minute documentary that “explores the history of Silver Spring, MD, from its earliest days, through the growth during the New Deal, its heyday as a booming retail center in the 1940s and ’50s, and its eventual decline and current revitalization,” according to the theater’s blurb.

He grew up in Shepherd Park, right across the line in Washington, D.C. Gottlieb moved to Silver Spring when he was in seventh grade and has been here ever since. Witnessing the decline of what had been a vibrant retail hub, he decided in 1998 to try to document the story of the deterioration that happened in the 1980s and 1990s.

“I thought that would be a poignant story to tell,” he said. “How did this once-thriving suburban downtown become so dilapidated and deserted?”

“In the course of making the film, downtown Silver Spring started to come back to life,” he said. “It was being revitalized, and then it became a much richer story, with a more positive final act.

“By the time the film debuted in 2002, the new downtown Silver Spring was unveiled, and the downtown was coming back to life,” Gottlieb said.

Some were easier to persuade to participate than others.

“Goldie Hawn was the hardest ‘get,’ I’d say,” said Gottlieb. “Others, like Ben Stein, who went to Montgomery Blair, were much more accessible.

“Most of them were happy to cooperate,” he continued. “I think it’s because most of the celebrities who grew up here have a lot of pride in Silver Spring and they’re happy to talk about it.”

To help finance the film, Gottlieb won grants from the Arts and Humanities Council of Montgomery County and the Maryland State Arts Council, and support from various community sponsors. Later, WETA-TV came on as a production partner.

He also got support from a number of volunteers and groups such as the Silver Spring Historical Society and its president, Jerry McCoy.

“He put in hundreds of hours in pro bono assistance to help us with the film, which was invaluable,” Gottlieb said.

He also had participation from people in the community who provided photos, archival film, leads and other resources (many of them are in the documentary as well). For example, the late Ric Nelson provided 16mm color film of the 1950 Thanksgiving parades in downtown Silver Spring.

The documentary debuted in 2002 on WETA-TV as a pledge drive special, has been re-aired on the station a number of times since then, and it’s been shown at film festivals and other screenings over the years as well.

This 15th anniversary showing coincides with Art House Theater Day, a celebration of the role art houses play in communities around the country. AFI’s official program for Art House Theater Day is an advance screening of “LUCKY,” starring the late Harry Dean Stanton, and the programming staff thought Gottlieb’s film was a good fit to show on the same day.

“I hope [attendees] come away with an appreciation that their community has a long and dramatic history that goes back to the 1840s,” Gottlieb said, “that it is a very unique American suburb, largely because of its proximity to Washington, D.C., the nation’s capital, and that it has a history worth preserving.

“I don’t think people realize how much history there is in Silver Spring,” he added, citing a number of examples. “I don’t think they know, for instance, that President Harry Truman used to board the train back home to Missouri from the Silver Spring B&O Railroad Station.

“I don’t know if they know that that the Silver Spring shopping center, where Red Lobster and Panera are now, was one of the first modern drive-up shopping centers where you would park your car and shop,” Gottlieb continued. “I don’t know if they know that a crucial piece of munitions was developed at the Johns Hopkins Applied Physics Laboratory in downtown Silver Spring.”

All that and a lot of additional history is covered in the film.

“There’s all these historical events and fun facts that people who live here, especially people who have only recently arrived, most likely don’t know and will find fascinating,” Gottlieb.

The showing starts at 11 a.m. Gottlieb will introduce the documentary and he and McCoy will be available for a Q&A after the film.