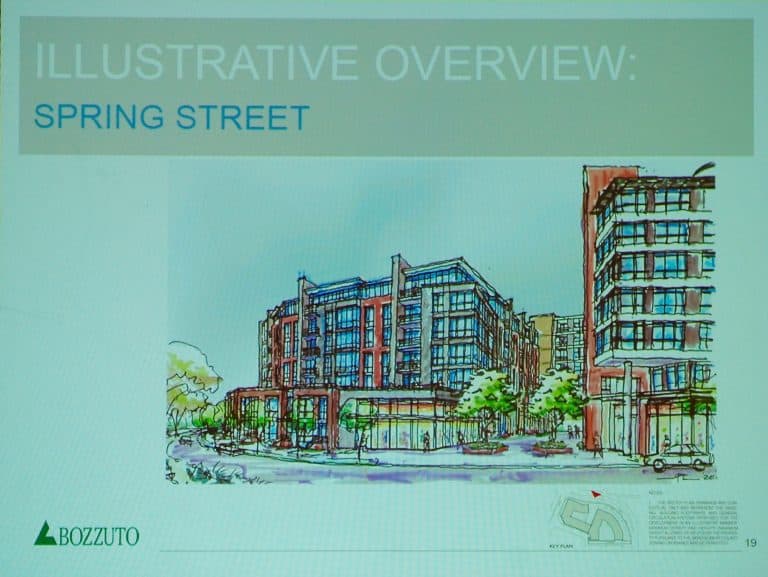 This is a concept of what new town homes along Spring Street could look like. Photo of Bozzuto illustration by Mike Diegel.

The team selected to redevelop the Park and Planning headquarters property at 8787 Georgia Ave. presented its sketch plan to about 25 people Wednesday night.

Attendees got a preliminary look at what will be an evolving design and site plan during a development approval process likely to last several years.

Mike Henehan, senior vice president with Bozzutto Development Company, explained that the team of companies involved was selected during a request for proposals process in 2013.

“We were selected to redevelop the site into a highly integrated and mixed-use development,” he said, “both to consider the transition into the Central Business District and the core of Silver Spring and to the residential neighborhood to the north.”

“We are committed to designing a plan and a concept that respects the RFP process, respects the Sector Plan and all the planning that’s gone into this site over many, many years,” he continued.

The major components of the project will include street-level retail along Georgia Avenue, townhomes along Spring Street, civic space, hidden parking, a mid-block corridor through the site, streetscaping and mixed density residential units.

Rohit Anand, principal with KTGY, an architectural design and planning firm, focused on the planned flow of pedestrians and bikes around and through the site.

“This site is really very multimodal,” he said, “so we’ve been concerned on providing pedestrian, bike and vehicular circulation throughout the site.”

Both speakers talked about the mid-block connection, a planned passageway that will connect Spring Street through the site to Fenton Street, believing there are a number of interesting possibilities for place-making, lighting and design along the corridor.

Uri Pasternak, a member of the Silver Spring Citizens Advisory Board, attended the presentation and thought it was a good beginning to the process.

(Disclosure: Pasternak emphasized that while he is an engineer for a land-development consulting firm, that company is not involved in this project and he was there strictly as a citizen.)

“The sketch plan is sort of that initial approach,” he said. “But I think that they are definitely trying to be attentive to the community concerns while providing an interesting project.

“[After the presentation] there was some active community dialogue and it was a respectful back and forth,” he added.

“What we were hearing from community members is how the building might look,” Pasternak continued. “Their concern is sort of having a wall across from the existing townhomes and hopefully, that something that can be addressed architecturally speaking.”

The group expects to file an application in the next few weeks with a public hearing to follow in the spring.

Commencement of the project is contingent on the opening of a new Park and Planning headquarters building in Wheaton.