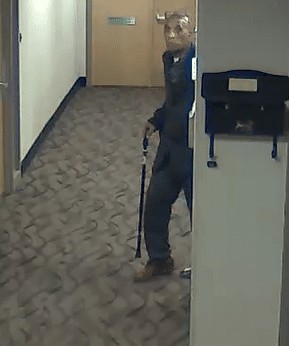 Police were called to 8720 Georgia Ave. on Sept. 15 following the report of a burglary discovered that morning by a worker who arrived to open the building. Police found four offices had been entered by force and had items stolen.

Video surveillance reviewed by 3rd District officers showed a suspect inside the building at 6:33 p.m. Friday, Sept. 14. That video has now been released by the department in hopes of learning the suspect’s identity.

Anyone who recognizes the suspect or has information about these burglaries should call the 3rd District Investigative Section at 240.773.6870.

Tipsters also may contact Crime Solvers of Montgomery County online or toll-free at 1.866.411.TIPS (8477) to be eligible for a reward of up to $10,000 for information that leads to an arrest and/or indictment of the suspect. Tipsters will remain anonymous.