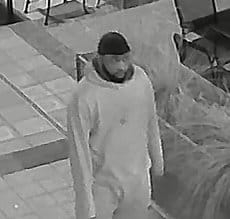 Montgomery County Police are still seeking the public’s help in identifying the suspect in the armed robbery of Moorenko’s Ice Cream at 8030 Georgia Avenue.

Police responded to a report of the incident at 9:50 p.m. on July 31. From the department’s press release:

“The investigation by detectives revealed that the suspect entered the shop, displayed a handgun, and confronted a clerk who was working behind the counter. The suspect demanded cash from the register. The clerk complied with the suspect’s demands. The suspect placed the money into his pants pocket and fled from the store on foot.

“Anyone with information regarding the suspect or this armed robbery is asked to call the Major Crimes Division at 240-773-5100. Those who wish to remain anonymous may call Crime Solvers of Montgomery County toll-free at 1-866-411-TIPS (8477). Crime Solvers will pay a cash reward of up to $10,000 for information provided to them that leads to an arrest in this case.”