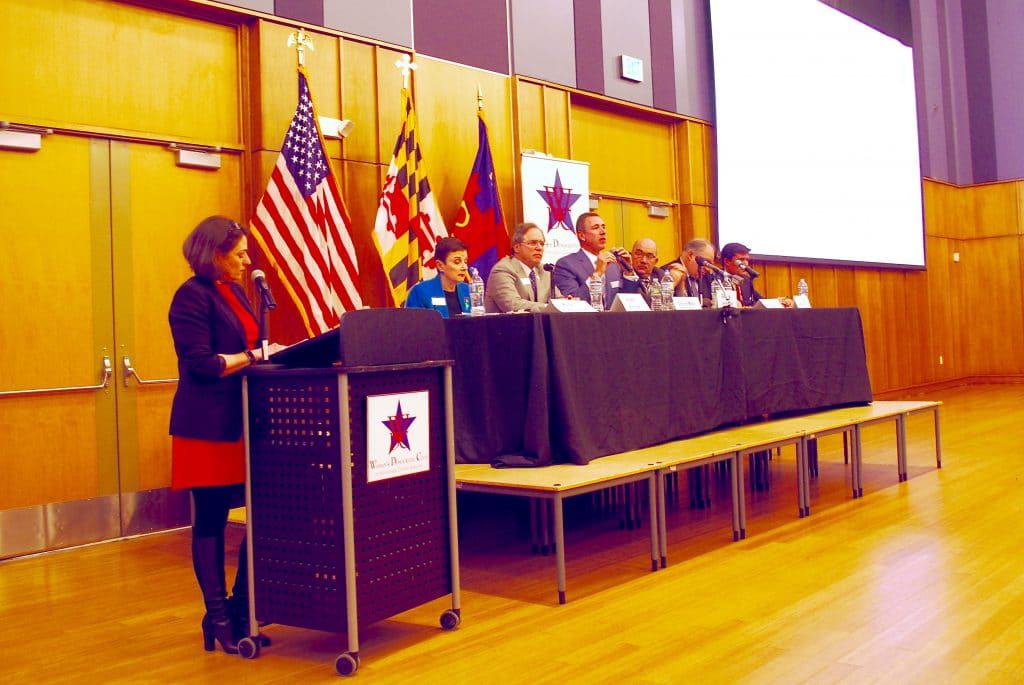 The six Democratic candidates for Montgomery County executive had a chance to address what is likely to be uppermost in voters’ minds at the June primary: How are you different from the other candidates?

The six appeared last week at a forum sponsored by the Woman’s Democratic Club of Montgomery County, held in a packed Buffalo Soldiers Great Hall in the Silver Spring Civic Building.

Businessman David Blair had the first crack at the question, emphasizing that the position is an executive role “and that’s what I’ve been for 20 years.”

He touted his experience in managing budgets, talent recruitment, and customer service, adding that his leadership of a healthcare technology firm has given him insights into how to better control healthcare costs.

“What you do it you set the vision,” he said, describing the executive’s role as he sees it. “Here’s where we want to go—the county’s here and it ought to be here.”

Then, he added, you surround yourself with the best and brightest people to work on that vision.

“You can never be the smartest person in the room,” Blair said, “and then you roll up your sleeves and you get things done.”

Councilmember George Leventhal (D-At Large) said he agreed with much of Blair said, adding, “What I bring is a deep understanding of the mission of every county department and the relationship between county government, state government, Park and Planning, the Board of Education, the energy utility—every one of the various entities with which the county executive must collaborate.”

In his view, the executive has to be the “coach of the team.”

Councilmember Marc Elrich (D-At Large) noted his experience as schoolteacher, 19 years on the Takoma Park city council, 12 years on the County Council, operating a small business, and working in a large business. His priority, he explained, would be to pay close attention to the budget and how effective county expenditures are.

State Del. Bill Frick (D-District 16) took a little dig at Blair, saying that the county executive doesn’t have the institutional powers that a business executive has, and noting the powerful role of the County Council on matters of budget and policy.

“The county executive here in Montgomery County has to call on some other powers. They’re going to have to be powers of personality, persuasion and vision, and engaging a broader set of powers,” Fick said. “To me, it’s about setting a vision and getting people to buy into your ideas and making that happen so that the council members want to be a part of that.”

Rose Krasnow, former mayor of Rockville and a veteran of the Planning Department staff, noted that she already had governmental executive leadership, as well as serving as a legislator, and said she understood those are very different roles.

She also addressed the obvious issue of being the only woman at the table.

“I think women look at issues differently than men do, and I think that I’ve gone through my work life and realized how often women are held back by policies that have been put into place by men,” Krasnow said. “I think that it’s very important that this county, which has never had a woman county executive, has one going forward.”

Finally, Councilmember Roger Berliner (D-1st District) wrapped up the round of questioning, telling the crowd that he recommended voters look at each candidates’ experience, record, temperament and vision.

He then spoke about his experience running small business for 18 years, and serving with the late Sen. Howard Metzenbaum of Ohio and former Rep. Henry Waxman, as well as in the Carter Administration.

“I know government and I know business,” he said, also touting his record of leadership including as chair of Metropolitan Washington Council of Governments and leading the push for Metro funding.

“My vision of our county is ‘a more perfect Montgomery County,’” he said, “one in which there is greater shared prosperity. That is my platform and it is what I will seek to bring about for all our residents.”

The forum started with a question about the number one issue the club raised: How would the candidates improve the lives of women in the county via economic development?

Krasnow noted that 25 percent of county high school students go on to college, so there’s a need for training programs to prepare them for jobs out of high school. Asked to name one policy or program to improve women’s lives, Krasnow cited the need to provide day care facilities for working families.

Berliner, along with Elrich and Frick, agreed with necessity for affordable early childcare and development. He touted the potential opportunity if Amazon locates in the county, including a $2 billion state investment, but also wants to support small business, talking about the county’s new microloan program.

“A microloan program allows people who don’t otherwise get access to credit that want to start a small business, maybe buy a sewing machine, maybe buy the equipment that can lead them to being a cook,” Berliner said, “and then start their business.”

In Blair’s opinion, there’s no shortage of programs to help women, but he said there is a shortage of funding and that it’s unevenly dispersed around the county.

Referring to his economic development program, “We’ve got to start creating jobs and expand the economy here so we can pay for all of those services,” he said. “We need to be investing more money into them.”

In addition, he suggested conducting debriefing sessions with minority businesses to listen to their needs.

Leventhal positioned himself as a champion of local procurement from women, minorities and disabled business people by the county, especially via a reserve program geared to them. He’d also like to work on program that he believes have the potential to revive vacant retail spaces.

“We need to move from the traditional mixed-use approach to maker spaces,” he said, “where multiple small, start-up businesses can occupy commercial space, perhaps to make jewelry or distill whiskey or make handbags or do sewing projects.”

Elrich also promoted county encouragement of small businesses, especially to help people turn ideas into profit-making businesses. In addition, he believes the county needs to improve the education system to prepare students for college or work, if they choose not to go on to post-secondary education.

One idea he mentioned is working with the Universities at Shady Grove to educate students who, if they are then hired in county and work here for a certain number of years, earn free tuition.

Finally, Frick talked about growing the county’s economy to help women. “I think that comes down to talent, taxes and transportation.”

By that, he said, he meant making sure those students headed into the workforce are attractive to employers, and that the tax and regulatory structure in the county is conducive to building strong businesses.

Other issues covered during the forum included affordable housing, which all the candidates agreed was a necessity (Frick also pointed out the county has a shortage of middle class housing as well). Berliner and Blair favored using county property, while Leventhal suggested more housing could be built on land owned by the religious community.

All agreed that partnerships would be key to the effort, with Krasnow pointing out that to serve families, developers need to build units larger than the studios and one-bedroom-apartments that make up the bulk of affordable housing construction now.

A recording of the entire forum is available for viewing here.