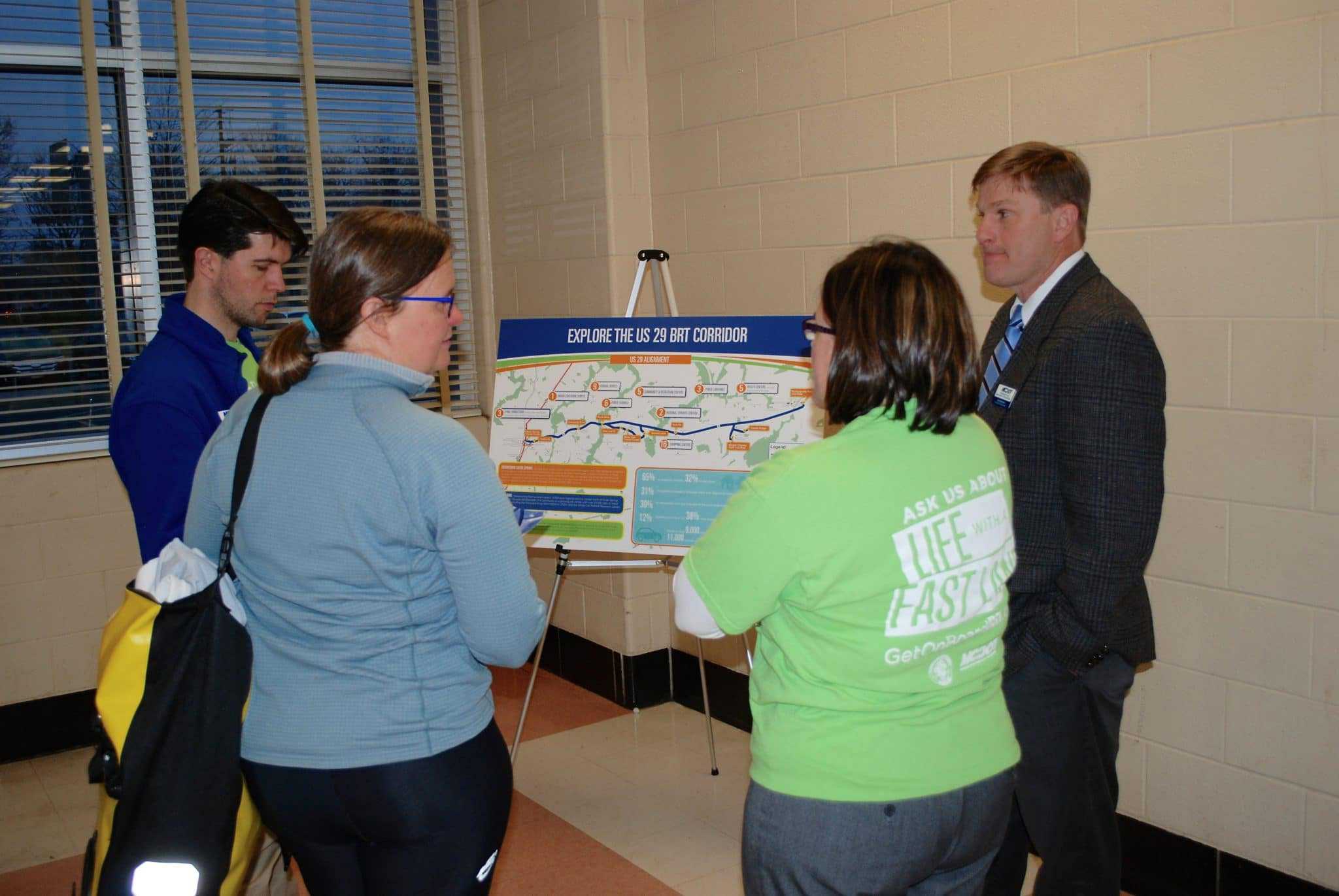 Staff members from the county’s Department of Transportation explained the plans for a Bus Rapid Transit system during an open house last night. Photo by Mike Diegel.

Montgomery County’s Department of Transportation last night held the second in a series of three open houses on the work that’s been done so far to study a bus rapid transit system along the U.S. Route 29 corridor.

“The Maryland Department of Transportation has been doing a study on the corridor for the last two years,” said Joana Conklin, rapid transit system development manager for the county DOT. “We’ve been working very closely with the state and at this point, the project is transitioning over to the county to lead the design and implementation.”

A BRT is designed to provide large buses running in dedicated lanes with green light priority and fewer stops than a regular bus. The county intends to use 60’ articulated buses for this system, Conklin said, and the goal is to reduce traffic congestion along the routes under study.

Current plans call for busses to run every 7.5 minutes during peak periods and every 15 minutes off peak from 5 a.m. to midnight, seven days a week. Busses will run from Burtonsville to the Silver Spring Transit Center, though there are discussions underway that would expand service into Howard County.

The open houses are intended to serve as an introduction to the project, an overview of the corridor route and where the bus stations are planned to be located, among other information.

The design phase is just getting underway, Conklin said, and the meetings provided some information about station design and the opportunity to look at some prototypes.

“We intend to come back again in the fall, likely in September, once we’ve gotten farther along in our design,” she said, “to show some more specific design of the stations to the public.”

The stations will be designed like a train station, where the floor level is elevated to the same height as the entrance to the buses. Buses will have Wi-Fi connections and power outlets for commuters.

The county in 2014 established Corridor Advisory Committees consisting of representatives of the neighborhoods, business owners and other stakeholders along each corridor currently being studied, which includes Route 355 and Veirs Mills Road.

The CACs have been meeting regularly with the project team to provide feedback during the planning process. The open houses are intended to reach a broader audience and get input from them as well as the project proceeds.

Construction of the system is planned to begin mid-2018 with service starting in late 2019-early 2020.

The next open house for the Route 29 corridor will be held tomorrow night from 6:30-8:30 p.m. at the White Oak Community Center Social Hall at 1700 April Lane.