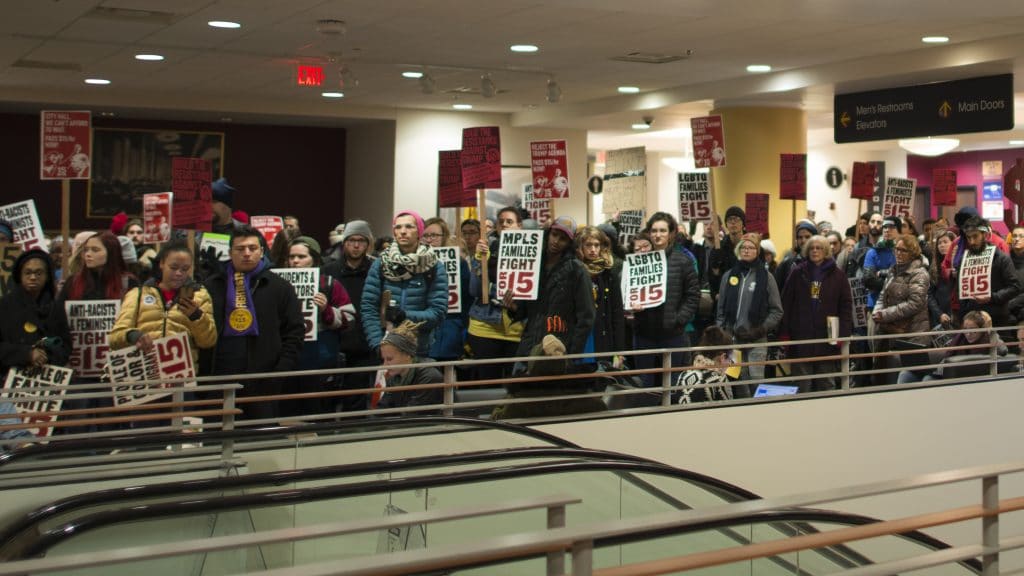 There is a national movement advocating for a $15 per hour minimum wage. Photo from Wikimedia Commons.

The County Council voted unanimously to require all county employers to pay employees a minimum wage of $15 an hour by July 1, 2024.

In addition, the bill requires that the minimum wage be adjusted annually for inflation according to the Consumer Price Index for urban wage earners and clerical workers, starting July 1, 2022.

The county is one of the first jurisdictions in the country to require a $15 minimum wage, the fight for which has become a national movement.

Hucker proposed amending the bill to define small, medium and large employers and setting dates by which each size employer must pay the $15 minimum wage, as follows:

“The minimum wage is supposed to be a living wage that allows a worker to support themselves without relying on taxpayer-funded social services. So I’m thrilled that the Montgomery County MD Council became today the first suburban jurisdiction to raise our minimum wage to $15/hour,” Hucker wrote on his Facebook page.

“I’m proud that the amendments I offered today resulted in a unanimous 9-0 vote of my colleagues, and I am confident the county executive will sign this bill after vetoing the last one,” he continued.

County Executive Ike Leggett vetoed a minimum wage bill earlier this year. That bill would have required employers with 26 or more workers to pay a $15 minimum wage by 2020, and smaller employers pay the minimum in 2022, on the grounds that it was too much, too fast and would have a negative effect on county employers.

“Based on the changes from the original bill, what the County Council approved today is close enough to the conditions I laid down for my support that I will sign the measure into law,” Leggett said in a statement.

“What we have done today is huge. By passing this bill we recognize that people who work deserve to earn a decent wage. Raising the minimum wage is good for families, for neighborhoods and for our schools,” said lead sponsor Councilmember Marc Elrich (D-At Large) in a press release.

“I taught in a high-poverty school in Montgomery County for 17 years, and I saw up close the effects of poverty. Poor children live in homes where their parents are highly stressed about paying for rent, food and medical care—basic necessities of life. That stress has an enormous impact on their children, and those impacts have lasting effects,” he continued.

The current county minimum wage is $11.50 per hour, which went into effect on July 1.