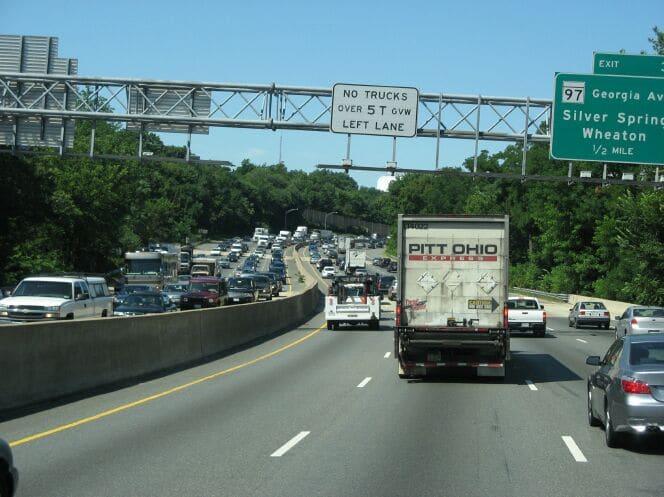 Photo of the Maryland Beltway from onejourneyatatime.com

A group of area residents has revived Citizens Against Beltway Expansion to oppose various proposals being discussed under Gov. Larry Hogan’s (R) managed lanes study for the Maryland Beltway and I-270.

The State Highway Administration is currently seeking proposals for a public-private partnership (P3) to build, finance and operate any improvements for about 70 miles of roadway and is early in the public information process.

“I went to participate and it was essentially sort of a public relations exercise,” he said. “It was a series of boards showing the different steps in the process and then there was a couple of suggestion boxes where you could make a suggestion and react, sort of in a vacuum tube to this presentation, which didn’t provide any detail.

“I was unnerved and a bit upset and got involved,” he added, and is now serving as CABE’s co-chair.

The current effort is an offshoot of the original CABE, which formed in 2006 and had similar objectives. After that expansion effort died, the group went more or less dormant while still maintaining its infrastructure.

“Now that this plan is back on the table, it has come to life again in order to raise questions and inform the public and find a better way to address all these issues,” German said.

CABE held an organizing meeting July 12 that was attended by about 70 people, including Democratic primary winners for state delegate Emily Shetty, Lorig Charkoudian and Jared Solomon, plus representatives from Evan Glass (Democratic primary winner for County Council at-large), the Sierra Club, Friends of Sligo Creek, and a number of area civic associations.

The group is forming the following committees:

The first committee meetings were held last Sunday, and there are plans in the works for a CABE fundraiser in the fall.

Ann Horton, president of Indian Springs Citizens Association, one of the neighborhoods that would be most affected by any Beltway widening, is the other CABE co-chair.

“We have a pretty wide representation so far,” Horton, including people from east of Silver Spring to Potomac and up to Rockville who are interested in this effort.

At the same time, SHA has been conducting public workshops to present a number of ideas for improvements, including adding lanes of various types( such as for high-occupancy vehicles), toll lanes, reversible lanes, heavy rail, light rail and bus rapid transit.

The general reaction so far from CABE is opposition toward several of the ideas. The group has outlined some of its objections on its Facebook page, including:

“It will have a catastrophic effect on existing businesses and neighborhoods while doing nothing to make traveling easier for the vast majority of travelers in Montgomery and Prince Georges counties.

“It will be a wasteful boondoggle that will benefit a handful of investors and rich commuters willing to pay tolls estimated as high as $41 per trip. (Similar Northern Virginia toll lanes recently topped $44 per trip.)

“Very high tolls at rush hour is not just a reflection of demand. Since few drivers are likely to pay tolls when the free lanes are clear, very high rush tolls are needed to cover operational costs, debt service, and investor returns.

“Experience shows that toll revenues are unlikely to cover costs and provide competitive returns without taxpayer subsidies, such as those provided on NoVa’s toll lanes or the ICC.”

In addition, the group (and others, judging from many online comments) is decrying the lack of details presented so far by the state.

“They’re essentially asking people to react and make up their minds about a project on less information than any responsible business would ever decide and make a decision upon,” German said.

“One of the big things we’re trying to do is do public education and amplify what is coming out from SHA, in terms of information and the public meetings and things like that,” Horton said.

“We continuously are talking to people who just have no idea that this in going on, and if there’s a threat to your home, you’ve been notified,” she continued. “If you’re one street over or across from that, you haven’t been officially notified about what’s going on.

Any widening would not only affect homes, but also the YMCA and Indian Spring Terrace Park on the south wide of the Beltway.

“We’d like to have a more clear idea of what the plan is,” Horton said, “so we can even mobilize around it, either in favor or opposed, depending on what the final plans are going to be.”

For more information about CABE, or to volunteer, contact the group via email.