A Decade Later: The Jug Handle and the Gene Lynch Urban Park 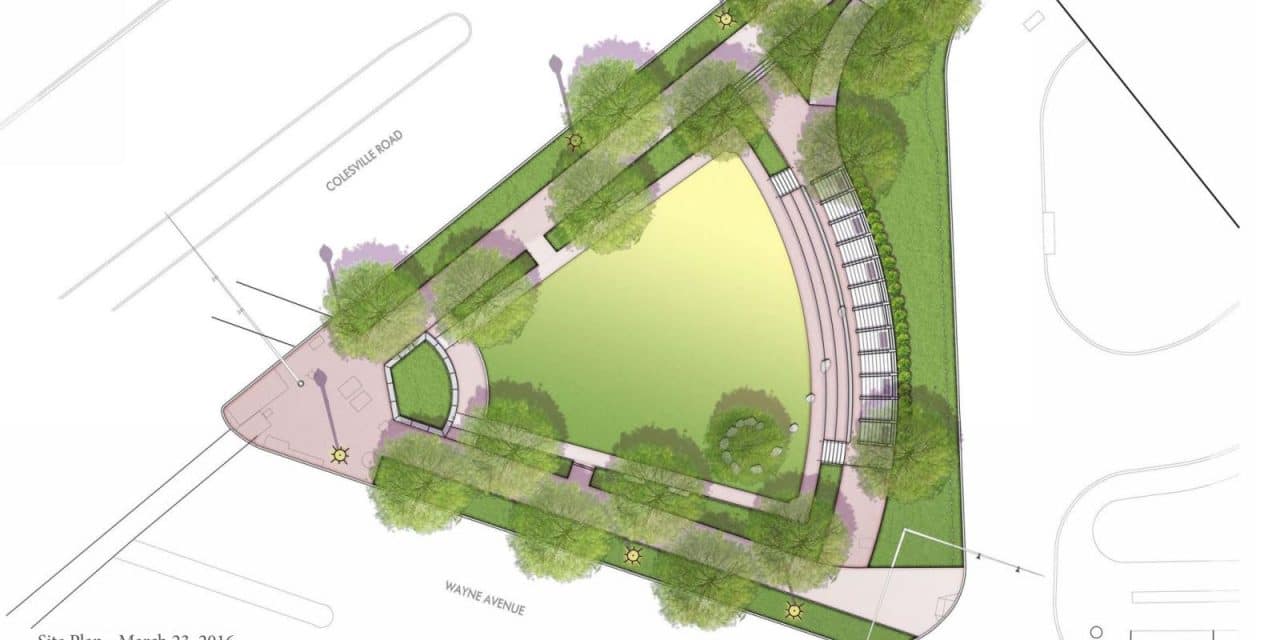 With news of Discovery’s departure from Silver Spring, there has been much speculation about what will happen to the Discovery building and site. And with past issues surrounding the construction of the Silver Spring Transit Center across the street, there had been much attention paid to that project. And now with the start of Purple Line construction in the same vicinity, there has been steady news coverage about that project.

But surrounding all of these big projects and news-making headlines is a long-delayed smaller project that has gotten too little attention and seems all but forgotten: the Gene Lynch Urban Park, planned for the corner of Wayne Avenue and Colesville Road. Hopefully, that is about to change.

[Editor’s Note: Gene Lynch was a Silver Spring resident who began his career as a civic activist. He went on to serve as chief assistant to former Montgomery County Executive Neal Potter and as chief of staff to former Gov. Parris Glendening, among other political roles. He also was a member of the Planning Board, on which he was serving when he died in 2008. That same year, the board declared the Silver Spring Urban Park would be renamed the Eugene R. Lynch III Urban Park in his memory.]

In 2008, there was some parkland “musical chairs” in downtown Silver Spring. At the time, the existing Metro Urban Park was displaced to make room for the Silver Spring Transit Center. In exchange, two new replacement parks—the Transit Plaza Easement and Gene Lynch Park—were supposed to be built in the area concurrently with the construction of the Transit Center. It was determined that even though the replacement parks would be smaller than the Metro Urban Park, they were to be nicer (“the highest quality”).

Many people are at least somewhat familiar with the fiasco that was the construction of the Silver Spring Transit Center. It has become an example of what can go wrong with projects—extended delays, spiraling costs, problems with construction materials, issues with management and contractors, and lawsuits.

The Transit Center was supposed to be completed in 2010, then 2011, then 2013, and then it did not finally open until 2015. The adjacent Transit Center Plaza Easement was completed as it is a main access point to the center. Gene Lynch Urban Park was not.

The current condition and location of the future park is a bare concrete “pizza slice” with little tree canopy, extensive impervious surface, no activation of the public space, and it contributes to the urban heat island in the area. It has lots of pedestrians but is not exactly a pleasant block to walk along. The construction of the promised replacement park would change that.

In 2014, there was a series of workshops about placemaking in Silver Spring. The Gene Lynch Park was identified and discussed, but still it was not completed as intended. Part of the potential nearby “active park” across the street next to the Transit Center will now be the site of the Purple Line elevated tracks and station—and it is unclear if the remaining land will ever be implemented into a real park. The nearby “passive park” by Discovery has often been criticized for being designed to appear private. Gene Lynch Urban Park was to be an “urban garden” in an area with little green.

Now the Gene Lynch Urban Park project is slated to finally be started in spring 2018 and is supposed to be completed in fall 2018. Seven years after it was supposed to be finished, it may finally come to be. It will transform the bare jug handle into a needed slice of green in an area that already has too little green and will finally make good on the agreement with WMATA to replace the parkland that was lost in the area. Will it actually happen now?

Amanda Farber is an advocate for green space and infrastructure, and a member of Conservation Montgomery. She blogs at BeMoCo.