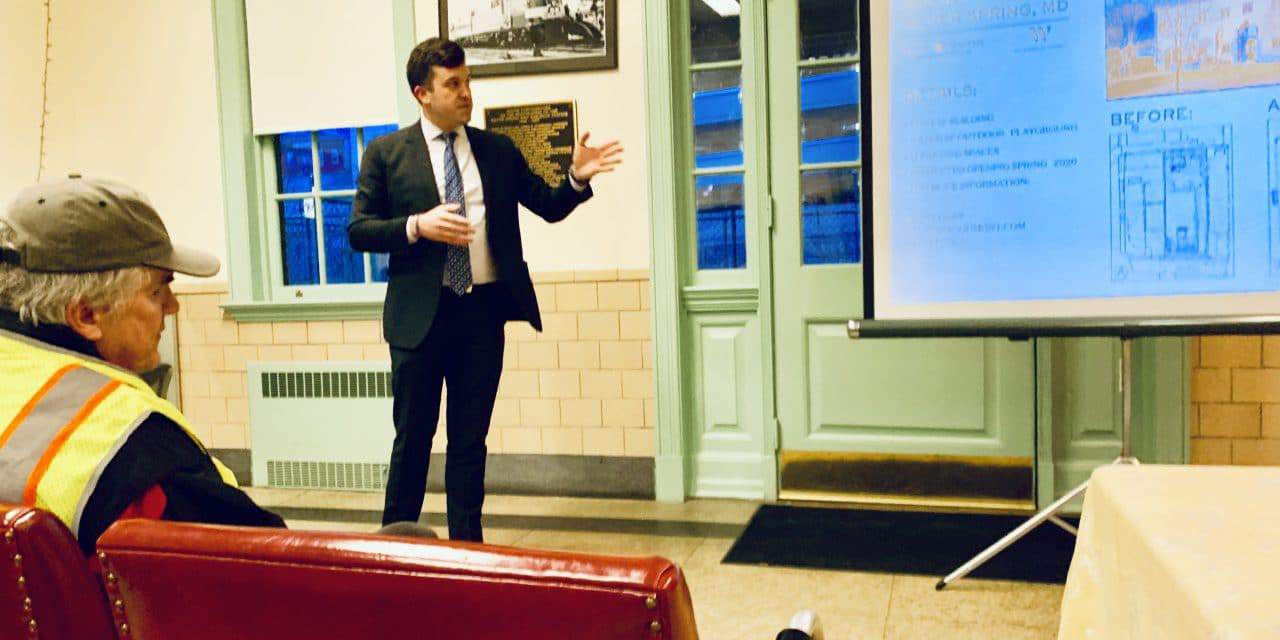 A Silver Spring veterinary clinic would be redeveloped into a childcare center under a proposal presented last night during a meeting of the East Silver Spring Civic Association.

Ambassador Animal Hospital at 811 Sligo Ave., owned by Dr. Sailendra and Aruna Roy, would become a franchise of Kiddie Academy, an Abingdon, Md. company that provides educational childcare at about 200 locations around the country.

“We would actually be constructing the upper floor of facility,” he said, “which hasn’t been constructed in the current operation of the facility.”

The redevelopment would create a 13,164-square-foot building with classrooms and other space for up to 191 children, primarily infants up to kindergarten age with some after-school care clients.

In addition, the developer would create a 5,000-square-foot playground in back of the building (required by the state), redo the landscaping along Sligo, and add 12 parking spaces in the alley next to the clinic.

“The access would be realigned to where the primary access, or ingress, into the site would come off of Sligo Avenue and would actually exit through the alleyway [to Fenton Street],” Gary said.

The center plans to operate weekdays from 6:30 a.m-6:30 p.m., with parents parking to take children into the center and then picking them up later in the day.

The development team estimated that there are about 2,100 children of childcare age with a one-mile radius of the site, and about 18,000 within three miles, which is considered to be within the market for a Kiddie Academy.

The developers have not yet undertaken the required traffic study, but estimate that the operation would bring in about 50 additional cars (25 in, 25 out) during peak hours. In the morning, those hours are typically 6:30 to about 9 a.m., based on experiences at other centers.

Traffic concerns dominated the discussion during the presentation, as attendees envisioned cars backing up onto Sligo Avenue as they wait to enter and park. One person suggested reversing the traffic flow to exit via a right-turn-only onto Sligo, which perhaps would ease congestion.

However, attendees also heard from parents about what they described as a critical need for childcare in the area.

One father (whose children would be too old to attend this facility by the time it opens) spoke of being on a three-year waiting list for childcare. An expectant mother said she had been told she faced a 12- to 18-month waiting period, and may be forced to go to Hyattsville to find care.

Last night’s meeting was required as part of the planning process and preceded the filing of the preliminary site plans and other required documents, which will also be discussed in additional public meetings.

Gary said the goal is to open the academy in the spring of 2020.